Monmouth Castle (Welsh: Castell Trefynwy) is a castle in the town of Monmouth, county town of Monmouthshire, south east Wales. It is a Grade I listed building and scheduled monument. Monmouth Castle is located close to the centre of Monmouth on a hill above the River Monnow, behind shops and the main square and streets. Once an important border castle, and birthplace of Henry V of England, it stood until the English Civil War when it was damaged and changed hands three times before being slighted to prevent it being fortified again. After partial collapse in 1647, the site was reused and built over by Great Castle House, which became the headquarters and regimental museum of the Royal Monmouthshire Royal Engineers.

Immediately after the Norman Conquest, William the Conqueror installed three of his most trusted confidants, Hugh d'Avranches, Roger de Montgomerie, and William FitzOsbern, as the Earls of Chester, Shrewsbury and Hereford respectively. The earldoms served to guard the frontier and provided bases for the Norman invasion of Wales. Over the next four centuries, Norman lords established mostly small Marcher Lordships between the Dee and Severn, and further west. Military adventurers came to Wales from Normandy and elsewhere, raided an area of Wales, and then fortified it and granted land to some of their supporters.

William FitzOsbern established Monmouth Castle between 1066 and 1069 as a counterpart to his other major castle at Chepstow. It occupied relatively high ground, overlooking the confluence of the Monnow with the River Wye. It was originally an earth and timber ringwork fortress, which was listed in the Domesday Book. Initially, Monmouth was a fairly typical border castle in the Welsh Marches, presided over by a Marcher Lord and similar in style and status to its near neighbours Grosmont Castle, Skenfrith Castle, White Castle and Abergavenny Castle. The wooden castle had stonework added before 1150. Its tower shares some similarities with that of Chepstow Castle, another stronghold built for FitzOsbern further south, at the lower end of the River Wye.

Expansion and later use

After briefly being held by Simon de Montfort, 6th Earl of Leicester, Monmouth Castle passed into the hands of Edmund Crouchback, Earl of Lancaster and son of Henry III in 1267. He redeveloped the castle, building the Hall and took it as his main residence in the area. It was further improved in the early 14th century, probably by Crouchback's grandson, Henry of Grosmont, 1st Duke of Lancaster. During this period large decorated windows were installed in the upper part of the Great Tower which also had a new roof. As a town developed around the castle, the castle's defences were augmented by a town wall and fortified bridge, built at the end of the 13th century.

Edward II briefly was held prisoner in the castle before he was transferred to Berkeley Castle where he died. The castle was a favourite residence of Henry Bolingbroke, later King as Henry IV. It was here that in 1387 the future King Henry V of England was born, to Bolingbroke's first wife Mary de Bohun.

The turmoil and conflict in Wales during the ten years of the Owain Glyndŵr rebellion did not directly affect Monmouth Castle as it was a stronghold of the region and lesser targets presented themselves more readily to essentially a guerilla army. However other local towns, settlements and castles were directly attacked with Grosmont and Abergavenny being razed and Crickhowell Castle and Newport Castle successfully attacked.

Over the centuries, as its defensive function diminished, the outer bailey of the castle became increasingly used as a market place, later (and now) known as Agincourt Square. During the sixteenth century, when Monmouth became the county town of the newly formed shire of Monmouth, the county's Courts of Assize began to be held in the castle's Great Hall. 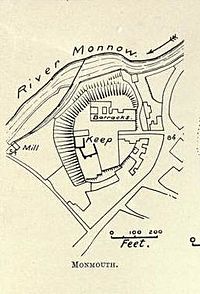 In the tumult of the English Civil War, Monmouth Castle changed hands three times, finally falling to the Parliamentarians in 1645. When Oliver Cromwell visited in 1646 he ordered it to be slighted to prevent its military re-use. The round tower was attacked on 30 March 1647 and subsequently fell down. The diary, now lost, of More Pye, then usher at Monmouth School, records the collapse on 22 December 1647; "about twelve o'clock, the Tower in the Castle of Monmouth fell down, upon one side, whilst we were at sermon". William Gilpin, visiting Monmouth on his Wye Tour, described the castle's decline by the end of the 18th century; "The transmutations of time are often ludicrous... formerly the palace of a king, and birth-place of a mighty prince: it is now converted into a yard for fatting ducks".

Great Castle House was built in 1673, on the site of the old round tower, by Henry Somerset, 1st Duke of Beaufort. It is a Grade I listed building, and has been described as "a house of splendid swagger outside and in". It later became used for the Assize Courts, until they relocated to the new Shire Hall in 1725.

Only fragments of the castle, including the Great Tower and Hall and parts of the walls, remain above ground, and on the site Castle House and Great House have been built. In 1875, the Royal Monmouthshire Royal Engineers Militia, the senior Territorial Army regiment today, made it their Headquarters building and so it remains. It is one of the few British castles in continuous military occupancy. The Royal Monmouthshire Royal Engineers museum is located in the stable block attached to Great Castle House. It includes exhibits relating to the history of the regiment from 1539 to the present day.

The castle is a Grade I listed building and a scheduled monument in the care of Cadw.

All content from Kiddle encyclopedia articles (including the article images and facts) can be freely used under Attribution-ShareAlike license, unless stated otherwise. Cite this article:
Monmouth Castle Facts for Kids. Kiddle Encyclopedia.