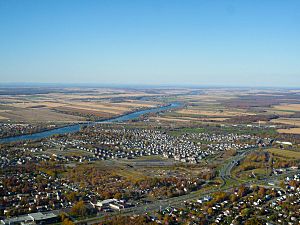 Mont-St-Hilaire is a small town in the province of Quebec. This small city is along the Richelieu River on the south shore of Montreal city. In 2011, Mont-St-Hilaire had a population of 18 000 citizens. There are many new neighborhoods on the mountain side.

The first Lord of Mont-St-Hilaire was Jean-Baptiste Hertel de Rouville in 1694. Mr. Hertel bought the mountain before anyone was living there. In 1745, the first village was built. In 1768, the first road "Chemin de La Montagne" was built to give access to the first citizens.

In 1837, the Mont St-Hilaire’s church was built. In 1898, a famous painter named Ozias Leduc painted the church. The sculptor Jodi Bonnet and the painters Ozias Leduc and Paul-Émile Borduas lived in the town.

Many activities are available in this small city. You could hiking in the mountain, picking apple, or to get one the bicycle on the cycle track

All content from Kiddle encyclopedia articles (including the article images and facts) can be freely used under Attribution-ShareAlike license, unless stated otherwise. Cite this article:
Mont-Saint-Hilaire, Quebec Facts for Kids. Kiddle Encyclopedia.