Moreton Corbet Castle is an English Heritage property located near the village of Moreton Corbet, Shropshire, England, 8 miles northeast of Shrewsbury. It is a Grade I listed building. The ruins are from two different eras: a medieval stronghold and an Elizabethan era manor house. The buildings have been out of use since the 18th century. 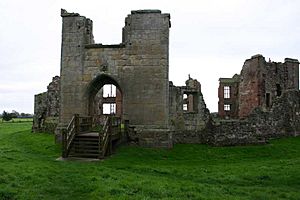 In 1086 two Anglo Saxon thegns, Hunning and Wulfgeat, were living at Moreton Corbet. Perhaps they had a fortified structure here. By the early thirteenth century the structure had been replaced by another, built by Toret, an Englishman. His descendant Peter Toret was lord of Moreton Corbet by 1166 and it is likely that he was living in the castle. In February 1216 William Marshall stormed Moreton Corbet castle on behalf of King John of England against Bartholomew Toret. At this time the castle was known as Moreton Toret Castle. In 1235 Bartholomew died and Richard de Corbet, his son-in-law, inherited the castle and changed its name to Moreton Corbet.

The castle next saw action in the English Civil War when the castle changed hands at least four times.

Moreton Corbet remains the property of the Corbet family. 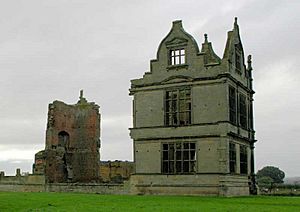 In the 16th century, Sir Andrew Corbet made many alterations to the gatehouse and the perimeter wall. When he died in 1579, his son, Robert Corbet (died 1583), influenced by the classical architecture overseas he had seen in his role as a diplomat, set about building a new mansion. Unfortunately, he died of the plague in 1583. After his death, his two brothers and successors, Richard and Vincent Corbet, carried on with the building of the new manor, and leaving what was left of the original fortification.

During the English Civil War, Moreton Castle was used as part of Royalist Shrewsbury's defence. The castle was under siege on more than one occasion, and badly damaged in the fighting. At one time, the castle was captured by just ten parliamentary troops. It was finally taken from what amounted to a 'home guard' force by a crack Parliamentarian regiment.

The ruins can be visited during daylight hours free of charge.

1. The castle today is generally approached from the west, where there is visitor parking at the roadside, although there is an entrance on the northern edge of the site from the church. The distinction between the much-adapted medieval castle and the later Elizabethan house is immediately obvious. The Elizabethan building stretches in a straight line to the south of the older structure and well to the west of it.

2. The main path takes the visitor past most of the medieval and early Elizabethan castle to the gatehouse, which was much rebuilt in the sixteenth century. This was the entrance to the medieval building. Although he repaired and adapted it, Sir Andrew Corbet decided to retain this important defensive feature. Above the arch, his monogram and the date 1579 are carved on a square stone, surmounting another rectangular stone bearing the family crest of an elephant and castle in relief. As Corbet died on 16 August 1578, the carving must have been added to the building after his death, suggesting that it was still unfinished.

3. The gatehouse is now roofless and open. Behind the pointed gothic arch of the entrance, the corbel work that supported the roof and tower battlements is still apparent.

4. Entering the inner courtyard and looking north, the layout of the medieval castle is apparent. The keep or great tower to the west was connected to the gatehouse by an irregular and much rebuilt curtain wall, which then curved south and looped to encircle the site, creating a bailey or courtyard. The walls are now in a ruinous state, allowing the church to appear in the background. All the masonry is much pock-marked by musket shot from the Civil War. Sir Andrew had a large domestic range built against this wall, with kitchens below and accommodation above.

5. At the western end of the extant curtain wall is a fine rectangular keep of two stories and a basement. It is difficult to date such structures and it could be as old as the eleventh century, although it more likely belongs to the twelfth. or even early 13th. It was entered through an elevated doorway and the fireplaces on the lower residential floor are still visible. The tower was much used and rebuilt, finally becoming a storehouse for the sixteenth century house. It was still inhabited about 1700.

6. The wall to the west and south of the tower is now almost completely removed, leaving a gap between the castle and the later house on this side.

7. In filling the courtyard to the east of the keep, a mid-sixteenth century house was built by Sir Andrew Corbet. East and south of the gatehouse, these Tudor domestic ranges opened into a great hall. The large fireplace is apparent on the first floor, with a smaller one on the lower floor. Doorways were made through the curtain wall to the latrines.

8. South of the castle, Sir Andrew's son, Robert, who died in 1583, had a wide but shallow house built in a more modern style, described by William Camden as "a most gorgeous and stately house after the Italian model." It seems to have been influenced by Italian buildings seen by Robert on his diplomatic travels, including Palladio's Basilica Palladiana in Vicenza. The building was faced with stone, but internally the walls were of brick.

9. It is possible to walk straight through the Elizabethan house and emerge through the main door in the south wall. This was elaborately decorated with carvings, like the rest of the facade.

10. The house is badly damaged and the western end is most complete.

11. Hence, viewing obliquely from the west gives a fair impression of the original design. Although Italian in inspiration and elaborately decorated, much of the carving was of a rustic finish.

12. A chimera is carved on the south west corner.

13. A wyvern complements it at the other end of the facade.

Although repaired after the Civil War, the buildings fell into disuse during the 18th century, and were partially demolished. They are still owned by the Corbet Family, but managed by English Heritage. The family moved to Acton Reynald Hall nearby.

All content from Kiddle encyclopedia articles (including the article images and facts) can be freely used under Attribution-ShareAlike license, unless stated otherwise. Cite this article:
Moreton Corbet Castle Facts for Kids. Kiddle Encyclopedia.