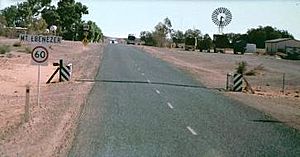 Mount Ebenezer is a pastoral station and roadhouse in the south of the Northern Territory, Australia. It is located on the Lasseter Highway, 55 kilometres (34 mi) from the Stuart Highway to the east and 200 km (120 mi) to Uluṟu in the west. Mount Ebenezer is owned by the community of Imaṉpa, which is surrounded by the property. It is one of the few Aboriginal-owned stations in the Territory. It is managed by Lisanote Pty Ltd, a company also owned by the Imaṉpa Community. This company also operates the Angas Downs Indigenous Protected Area, which borders the property to the west. The lease for the property is held by the Fogarty family.

The area falls within the traditional homeland of the southern Luritja people (Matuntara). Mount Ebenezer, the mountain that the station was named after, is in the Basedow Ranges and can be seen to the north of the roadhouse. The mountain itself is named for Ebenezer Flint, who worked in the area in 1871 on the Overland Telegraph Line. In the early 1920s, a pioneer named William Liddle established the Angas Downs sheep station to the west of the Basedow Ranges. He had previously worked at the telegraph station in Alice Springs. He settled at Angas Downs with his wife Mary (an Aranda woman) and had several children. From the late 1920s, the family began to use the Mount Ebenezer area as an extension of Angas Downs.

Mount Ebenezer was established as its own station in 1947 by William's second son, Harold Liddle. He was one of the first people of Aboriginal descent to get a perpetual lease for a pastoral property. Liddle sold the new station to Ted Kunoth in 1952. Kunoth built a roadhouse to service tourist traffic between the Stuart Highway and Uluṟu. In 1978, Kunoth agreed to allow the Aboriginal people of the area to set up a community on a part of the station's lands. The area at Imaṉpa, beneath the Basedow Ranges, was removed from the property for this. Kunoth sold the property's lease to Alan Rogers, who then resold to the Fogarty family in 1993.

All content from Kiddle encyclopedia articles (including the article images and facts) can be freely used under Attribution-ShareAlike license, unless stated otherwise. Cite this article:
Mount Ebenezer Facts for Kids. Kiddle Encyclopedia.