Angas Downs Indigenous Protected Area is a protected area in the south of the Northern Territory, Australia. It consists of a 320,500-hectare (3,205 km2) pastoral lease that is owned by the indigenous community Imaṉpa. It is located along the Luritja Highway, about 135 km east from Uluṟu-Kata Tjuṯa National Park and 100 km south-east of Kings Canyon. It borders the Mount Ebenezer Station to the east and the Curtin Springs Station to the west. The property was made an indigenous protected area on 10 June 2009, and forms part of Australia's National Reserve System.

Angas Downs is part of the homeland of southern Luritja and northern Yankunytjatjara people. Together they are called Matutjara, and speak a dialect that is a mix of the two languages. The people living at Imaṉpa include Luritja, Yankunytjatjara and Pitjantjatjara. The property contains several places (songlines and sacred sites) that are important to native families' Tjukurpa. Several animals that live in the reserve represent ancestral totems, reminders of people's identity, kinship and descent. Many of the plants and animals have also been important sources of food for the locals for thousands of years.

Previous land management practices and other pressures damaged Angas Downs and many native species disappeared. Game animals and edible plants are less common, and feral animals (camel and horse) and weeds are a major problem. The Central Land Council runs a ranger program in Imanpa.

The area of Angas Downs falls within the traditional homeland of the southern Luritja and northern Yankunytjatjara people. Together they are called Matutjara, and speak a dialect that is a mix of the two languages.

In the early 1920s, a pioneer named William Liddle came to this area looking for land in which he could raise sheep. He arrived at Wollunga, a soakage in the northern end of what is now Angas Downs, and found water there. Further south, he passed through a break in the Wollara Range, visiting another water hole near the site of what would later become the first homestead of Angas Downs. On his way south, Liddle located more water sources at Wilpiya (near the Kernot Range) and at Curtin Springs. In Oodnadatta in 1927, he bought 2000 sheep and drove them northwards along the Finke River and then southwards to the Wollara Range. In 1930, Liddle got a pastoral lease from the government for a block of land around the Wollara Range. He named his property Angas Downs, and settled here with his wife Mary (an Aranda woman) and their children. They built their homestead in the pass of the Wollara Range, which then became known as the Liddle Hills.

In 1945, William sold Angas Downs to two of his sons, Arthur and Milton. They moved the homestead to its present location, where there is a more reliable source of water. They also changed the station's stock from sheep to cattle. In 1947, another of William's sons, Harold Liddle, established a station of his own to the east at Mount Ebenezer. Arthur Liddle took over Milton's half of Angas Downs in 1956.

From July to October 1962, Frederick G. G. Rose stayed at Angas Downs and documented the local Aboriginal people and their way of life. He took a big interest in documenting how aboriginal culture was affected by contact with White civilisation. He also recorded the genealogy of the Liddle family and other Aboriginal families living on Angas Downs.

The Aboriginal community of Imaṉpa was formed near Mount Ebenezer in 1978. At Angas Downs, Arthur Liddle and his family continued to raise cattle during the 1980s and 1990s. As with many pastoral enterprises during this time, Angas Downs struggled with money. The property was eventually bought by the nearby Imaṉpa community, on 2 May 1994. Since then, it has been owned by the Imanpa Development Association, and managed by their company Lisanote Pty. Ltd. Angas Downs was declared an Indigenous Protected Area in 2009. The property still holds 300–400 cattle, which are restricted to a 266 km2 enclosure in the southeast. 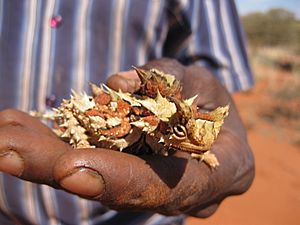 Thorny devil live widely across the property. It is used as the mascot of Angas Downs, and appears on the park's logo.

The reserve covers about 3,205 km2 (1,237 sq mi). The land is mostly flat, but there are two main ranges: the Kernot Range in the southwest and the Wollara Range (or Liddle Hills) in the centre. The old homestead is located in the centre of the property, in a valley of the Wollara Range. The new homestead is further to the south, along the Luritja Highway. This highway runs north–south through the middle of the property. It meets the Lasseter Highway at the southern end of the reserve. Important soakages on the property include Wollunga and Yaua in the north, Wallara in the southeast, and Wilpiya (also spelled Wilpia or Wilbia), located at the southeastern end of the Kernot Range. 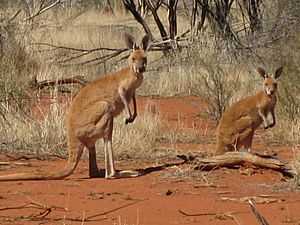 All content from Kiddle encyclopedia articles (including the article images and facts) can be freely used under Attribution-ShareAlike license, unless stated otherwise. Cite this article:
Angas Downs Indigenous Protected Area Facts for Kids. Kiddle Encyclopedia.