Its north peak was first climbed on August 6, 1934, and its higher south peak was climbed four days later on August 10, by Charles Houston, T. Graham Brown, and Chychele Waterston, via the west ridge. 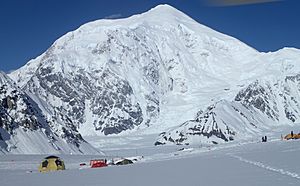 Mount Foraker was named in 1899 by Lt. J. S. Herron after Joseph B. Foraker, then a sitting U.S. Senator from Ohio.

The Denaʼina (formerly Tanaina) native peoples in the Lake Minchumina area had a broadside view of the mountains and thus gave distinctive names to both Foraker and Denali. According to Hudson Stuck, the Denaʼina had two names for Mount Foraker: Sultana meaning "the woman" and Menlale meaning "Denali's wife". The Denaʼina of the Susitna River valley and Denaʼina to the north are reported to have had the same name (Denali) for Mt. Foraker as they had for Denali (previously Mount McKinley), and it appears that the names were not applied to individual peaks but instead to the Denali massif. The mountain, along with Denali, was called Bolshaya Gora ("big mountain") in Russian.

Mt Foraker, on the left, is 3,000' shorter than Denali on the right, but appears taller in this image due to foreshortening. Photo taken from Kashwitna Lake roughly 100 miles (160 km) south of the mountains. Mt Hunter is just to the left of Denali.

All content from Kiddle encyclopedia articles (including the article images and facts) can be freely used under Attribution-ShareAlike license, unless stated otherwise. Cite this article:
Mount Foraker Facts for Kids. Kiddle Encyclopedia.