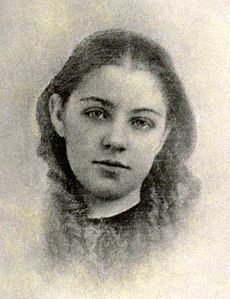 Ina Coolbrith as a young girl

Mount Ina Coolbrith (formerly Summit Peak) is a mountain of the Sierra Nevada, near the Nevada border in Sierra County, Northern California .

The mountain is visible from Beckwourth Pass through which Ina Coolbrith traveled, at the age of 11, with a party led by James Beckwourth. She would later claim to have been the first white child brought into California. The mountain was officially renamed in 1932 by the United States Geographic Board with the support of the California State Legislature and the Western Pacific Railroad.

The summit is 5.8 miles (9.3 km) west of Highway 395 in the Humboldt-Toiyabe National Forest. Most of the mountain, including its summit, is in Sierra County, California. However, the lower northern flanks extend into Plumas County and Lassen County.

The eastern portal of the Chilcoot Tunnel, near Beckworth pass, is 6.5 miles (10.5 km) to the north northeast.

All content from Kiddle encyclopedia articles (including the article images and facts) can be freely used under Attribution-ShareAlike license, unless stated otherwise. Cite this article:
Mount Ina Coolbrith Facts for Kids. Kiddle Encyclopedia.