Mount Moran (12,610 feet (3,840 m)) is a mountain in Grand Teton National Park of western Wyoming, USA. The mountain is named for Thomas Moran, an American western frontier landscape artist. Mount Moran dominates the northern section of the Teton Range rising 6,000 feet (1,800 m) above Jackson Lake. Several active glaciers exist on the mountain with Skillet Glacier plainly visible on the monolithic east face. Like the Middle Teton in the same range, Mount Moran's face is marked by a distinctive basalt intrusion known as the Black Dike.

Mount Moran is a massive and impressive mountain which would make it attractive to mountaineers. However, the comparative difficulty of the approach to the climbs makes it a much less popular climb than the Grand Teton and other peaks to the south. No trails to Mount Moran have been maintained for over twenty years, and any approach overland requires a great deal of bushwhacking through vegetation, deadfalls, and bogs along the perimeter of Leigh Lake. Instead, most climbers choose to canoe from String Lake, across Leigh Lake and then pick their way to their respective route; but even this may require some overland route finding. As a result, most climbs on Mount Moran tend to take several days even when the technical portion of the climb is comparatively brief. 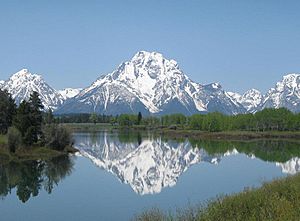 Mount Moran with the Snake River in the foreground

The first ascent of Mount Moran was made on July 22, 1922 by LeGrand Hardy, Bennet McNulty, and Ben C. Rich of the Chicago Mountaineering Club, via the Skillet Glacier route. It still provides perhaps the easiest and most direct route to the summit, and is rated 5.4. As the name implies, most of the climb is on the steep snow and ice of Skillet Glacier, thus an ice axe and crampons are be used during the ascent.

The most popular route up Mount Moran is the CMC route, named for the Chicago Mountaineering Club. The CMC is rated 5.5, and ascends the east face just south of the Black Dike. The CMC climbs good rock and is essentially free of snow and ice. It also has the advantage of a good camp high on the flank of the mountain.

The Direct South Buttress, a grade IV claim rated from 5.7 A3 to 5.9 C1, is a technical route suited for aid and Alpine climbnig. It has a vertical gain of approximately 1,500 feet (460 m), and features 11 pitches. This route is featured in the historic climbing text Fifty Classic Climbs of North America, and was first ascended by Richard Emerson, Don Decker, and Leigh Ortenburger, August 30–31, 1953.

Mount Moran rises abruptly above Jackson Lake. Grand Teton can be seen in the background at left

On November 21, 1950, a C-47 cargo plane owned by the New Tribes Mission crashed on Mount Moran during a storm, killing all 21 on board. A rescue party organized by Paul Petzoldt located the wreckage on November 25, but the extreme location of the crash made it impossible to recover the plane or the bodies. The wreckage remains on the mountain today, but the Park Service discourages climbs to the site.

All content from Kiddle encyclopedia articles (including the article images and facts) can be freely used under Attribution-ShareAlike license, unless stated otherwise. Cite this article:
Mount Moran Facts for Kids. Kiddle Encyclopedia.