Mount Robson was likely named after Colin Robertson, who worked for both the North West Company and the Hudson's Bay Company at various times in the early 19th century, though there was confusion over the name as many assumed it to have been named for John Robson, an early premier of British Columbia. The Texqakallt, a Secwepemc people and the earliest inhabitants of the area, call it Yexyexéscen (striped rock), spelled in Dawson 1891 as Yuh-hai-has-kun, The Mountain of the Spiral Road. Other unofficial names include Cloud Cap Mountain. 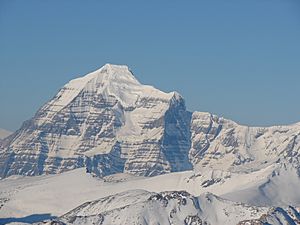 Mount Robson boasts great vertical relief over the local terrain. From Kinney Lake, the south-west side of the mountain rises 2,975 m (9,760 ft) to the summit. The north face of Mount Robson is heavily glaciated and 800 m (2,600 ft) of ice extends from the summit to the Berg Glacier.

The north face can be seen from Berg Lake, and reached by a 19 km (11.8 mi) hike. The lake is approximately 2 km long and lies at 1,646 m (5,400 ft) elevation. There are backcountry campgrounds at each end of the lake and a log shelter on its banks, named Hargreaves Shelter in honor of the Hargreaves family who operated the Mount Robson Ranch across the Fraser River from the mountain and who outfitted most of the early trips into Berg Lake. The Berg Glacier calves directly into the lake. The Robson Glacier, which fills the cirque and valley between Mount Robson and Mount Resplendent, in the early 1900s fed directly into both Berg lake and Adolphus Lake, straddling the Continental Divide and draining thus to both the Arctic and Pacific oceans via the Smoky and Robson Rivers, respectively. It since has receded more than 2 kilometres and is the source of the Robson River only. The peak of Mount Robson has a tundra climate (ET). 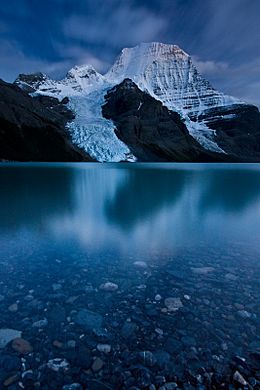 In 1893, 5 years after the expedition of A.P. Coleman to Athabasca Pass and the final settling of the mistaken elevations of Mt. Hooker and Mt. Brown, Mt. Robson was first surveyed by James McEvoy and determined to be the highest peak in the Canadian Rockies. The first documented ascent of Mount Robson, led by the young guide Conrad Kain, at its time the hardest ice face to be climbed on the continent, was achieved during the 1913 annual expedition organized by a large party of Alpine Club of Canada members who made use of the newly completed Grand Trunk Pacific railway to access the area. Prior to 1913, it had been necessary to approach the mountain by pack train from Edmonton or Laggan via Jasper and Lucerne, so only a few intrepid explorers had made previous attempts at exploring the mountain. The most famous early ascensionist was the Reverend George Kinney, a founding member of the Alpine Club, who on his twelfth attempt in August 1909 claimed to have reached the summit with local outfitter Donald "Curly" Phillips. A major controversy over this claim and over the implausible nature of his unlikely and dangerous route dominated the discourse within the Alpine Club elite, and he is now generally presumed to have reached the high summit ridge before being turned back at the final ice dome of the peak. Kinney Lake, below the south face, is named in his honour. 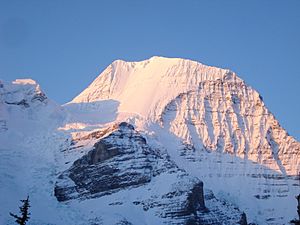 The North face (left) and Emperor face (right) in winter

The 1,500 m (4,921 ft) Emperor Face on the northwest side provides the most formidable challenge to elite climbers on the mountain, though the more popular routes are the Kain route and the southeast face. The Kain route follows the first ascent's path up the entire length of the Robson Glacier from its terminus above Robson Pass to the upper northeast face and the summit ridge. Mount Robson has a high failure rate on climbing to the top, with only about 10% of attempts being successful. Although the mountain is under 4,000 m (13,123 ft), there is no easy way to the summit and bad weather commonly rebuffs most summit attempts.

The main routes on Mount Robson include:

All content from Kiddle encyclopedia articles (including the article images and facts) can be freely used under Attribution-ShareAlike license, unless stated otherwise. Cite this article:
Mount Robson Facts for Kids. Kiddle Encyclopedia.