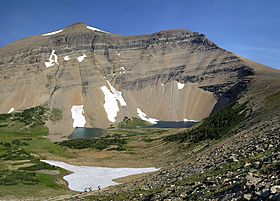 Mount Siyeh stands about two miles east of the Continental Divide, within the watershed of the Saint Mary River, which drains into the Saskatchewan River, and ultimately into Hudson Bay.

Mount Siyeh is rather easily accessible from a variety of different routes. It can be ascended via a long scree scramble from the Preston Park area, or from Piegan Pass via Cataract Mountain. The summit can also be reached via a long hiking/mountaineering route dubbed the "Skyline Experience"; this route starts from the Many Glacier Hotel and involves 5.5 miles (9 km) ridge walk and includes the summits of Wynn Mountain (8,404 feet (2,562 m)) and Cracker Peak (9,833 feet (2,997 m)) before reaching the top of Siyeh.
Route Descriptions can be found on Summitpost or in A Climbers Guide to Glacier National Park. 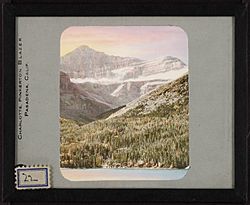 All content from Kiddle encyclopedia articles (including the article images and facts) can be freely used under Attribution-ShareAlike license, unless stated otherwise. Cite this article:
Mount Siyeh Facts for Kids. Kiddle Encyclopedia.