Kids Encyclopedia Facts
Not to be confused with Snow Mountain or Snow Peak. 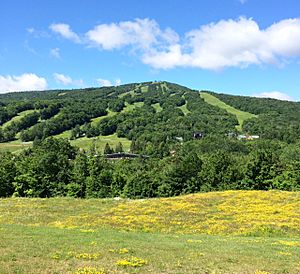 Mount Snow (previously known as Mount Pisgah) is a mountain and ski resort in southern Vermont located in the Green Mountains. It is Vermont's closest big mountain to many Northeast metropolitan areas.

Mount Pisgah is the mountain that is known by many as Mount Snow and was originally named after the Biblical Mount Pisgah (Bible). Mount Pisgah was purchased from its original landowner in early 1953 and on December 12, 1954, the mountain, renamed Mount Snow, opened to the public. Entrepreneur and dreamer Walt Schoenknecht owned the ski resort for many years and led its development into one of the largest ski areas in the country.

In 1992, the first snowboard park in the East was established at Mount Snow, named Un Blanco Gulch. The park featured jumps, a half-pipe, quarter hits, spines, wedges, banked turns, and a buried van. "The Gulch" remained a staple of Mount Snow's freestyle terrain until the 2008-2009 season when all terrain parks were moved to the Carinthia area of the mountain.

In 2000, Mount Snow hosted the 4th Annual Winter X-Games. The Games shattered previous attendance records and drew in athletes from around the world. The Games returned to Mount Snow the following year.

Mount Snow's own Kelly Clark won the first American gold medal of the 2002 Winter Olympics in Salt Lake City in women's half-pipe. She is a graduate of the Mount Snow Academy and the first athlete from Mount Snow to win an Olympic gold medal. Another Mount Snow Academy graduate, Devin Logan, won the silver medal of the 2014 Winter Olympics in Sochi in the Olympic debut of slopestyle. Eliza Outtrim, who placed 6th in women's moguls, also attended MSA.

In January 2009, Mount Snow hosted the Winter Dew Tour. It was the first action sports tour for winter sports and is owned and operated by Alli, the Alliance of Action Sports. Many of the top athletes in action sports from around the world participated in the Winter Dew Tour. Athletes such as Shaun White, Hannah Teter, Tanner Hall, Andreas Wiig, Gretchen Bleiler, Simon Dumont, Sarah Burke, and Travis Rice all vied for the Dew Cup, awarded at season’s end.

Mount Snow is made up of four separate mountain areas: Main Face, North Face, Sunbrook, and Carinthia. Main Face can be divided into smaller areas named after its main chairlifts, including Sundance, Ego Alley, Grand Summit, and Canyon. At the base of Main Face is Launch Pad, a learning area adjacent to the main base area's clock tower and ski school. There is also a learning area by the Sundance Lodge. The North Face, fittingly located to the north of Main Face, is home to some of Mount Snow's most advanced terrain. Opposite of the North Face, on the southern face of the mountain, is Sunbrook which offers scenic trails, great on bluebird days. Carinthia, an entirely re-designed mountain face, accessed via Long John and Deer Run, is home to 12 terrain parks hosting 125+ features including a mini-pipe (10 foot walls) and its Legendary Superpipe boasting 18 foot walls. The parks range from expert to beginner level features so there is fun for the whole family.

Beginners, intermediates, and experts alike will find suitable terrain on Mount Snow's Main Face. Most beginner trails are located at the lower mountain, which includes the Discovery Shuttle at Launch Pad, as well as the Seasons Double and Tumbleweed Triple chairlifts. These are purely novice chairs. The Seasons chair services Cooper's Junction, a pleasant yet short green circle. Tumbleweed services the bottom part of Long John, Mount Snow's marquee novice trail, and Somerset Road, another easy route. To the skier's right of Tumbleweed is Sweet Sixteen and also Season Pass which leads skiers through a tunnel to Carinthia. More difficult terrain can also be accessed, including Short Fuse, a super short chute and Frontier, a short but nasty tree skiing section. To the skier's left off Tumbleweed is the beginner-oriented Beaver Hill, which empties out at the main base area.

Located further uphill from the Tumbleweed chair is the Sundance Triple, an older fixed-grip triple that runs along the trail of the same name. Sundance is rarely crowded, and the trails it services are typically empty as well. When running, the Sundance chair takes about 10 minutes and doesn't reach the summit. However, most find it services some of Mount Snow's best intermediate runs, all of which can be accessed from the summit using Little John as well. The primary trails are Shootout and Sundance which run right under the chair. Further down along Little John, skiers can access Hop, Ridge, and Uncle's, all excellent blue squares that see little usage. Ridge, in particular, is a nice rolling run, often with great pockets of snow. All of these runs funnel into the bottom of "Ridge", a wide intermediate/novice trail leading back to the base of Sundance. For those who don't want to bother with the Sundance chair or Little John, South Bowl is an excellent (yet more frequently traveled) blue square that uses Link to connect skiers to Sundance. The only tree-skiing at the Sundance area is Fantasticks, which is seldom open.

Moving north on the Main Face, the Ego Alley Triple is similar to the Sundance Triple in that it's a fixed-griped chair that ends short of the summit. It begins at the main base area, however, so it can be more crowded when open. To no surprise, the main route off this lift is Ego Alley. It is a fun intermediate trail with a good pitch, perfect for skiers who want to show off some skill and get an ego boost, hence the name. However, Ego Alley, along with Charlie's Chase, occasionally is the trail used by the racing team, who set up gates to practice. At the end of Ego Alley is Yard Sale, a very short and not too tough black diamond that often gets bumped up. Following that is Beaver Tail, a much tamer run at the base of the mountain. The most challenging terrain in the Ego Alley section is Sap Tapper, a very tight tree-skiing area, but like others, it is seldom open.

Running parallel to Ego Alley, two chairlifts run from the base to the summit. They both are a 7 minute ride to the top. The Bluebird Express which is a high speed six pack bubble chair runs daily. The Grand Summit Express which is a high speed quad and it operates on most weekends and holidays. On busy weekends the Grand Summit express is the least crowded of the two lifts even though they take the same amount of time so this lift is definitely recommended over the bubble. For many skiers, the trip to the summit is all about one of Mount Snow's two most beloved novice trails: Little John and Long John. With an exception of brief Sundance lift traffic, both runs have no higher level trail dumps, making them perfect beginner boulevards. Long John has one alternative route, a short intermediate trail aptly called Cut Off, as it cuts off one of Long John's corners. The remainder of trails off the summit are all upper portions of Main Face trails. These include, Upper Exhibition, Upper Lodge, Upper Ledge, Upper Choke, and Cascade. Upper Exhibition runs under the Grand Summit Express, and has a long canted portion. The bottom part often gets moguls. Skiers can veer to the right onto Tramline to connect to the Ego Alley area. Upper Lodge and Cascade are perhaps the easiest of the "uppers" and see the most grooming. Both have very short steep sections. Upper Ledge, a rarely groomed black diamond, is one of the Main Face's most interesting trails. The trail stays true to its name, as there are indeed steep ledges that keep skiers on their toes.

The North Face is part of the mountain designed for more advanced skiers and snowboarders. The entire face is composed of black diamond trails, with a few exceptions, such as River Run, the connecting trail that leads to the lifts. The lifts are Outpost and Challenger. The North Face of Mount Snow is best known, however, for its double black diamond trail, Ripcord. Ripcord is the steepest and most difficult trail on the mountain, with large moguls. The North Face also has many tree skiing areas, such as The Plunge, Epiphany, and The Trials. The Plunge is located directly next to Ripcord and is known for its steepness, dense trees, and narrow cliff towards the end of the trail, which leads out onto Ripcord.

Newly re-designed for the 2008-2009 season, Mount Snow opened Carinthia. Home to 12 parks, over 125 features and a half pipe and a superpipe with 18 foot walls. After a renovation of the Carinthia base lodge including a new lounge and The Vault, a free-style ski and snowboard shop located in the basement, Carinthia offers the first and only all-park mountain face on the East Coast. Claiming host to the second stop of the 1st Annual Winter Dew Tour, Redbull Buttercup Finals and the FreeSki Open coming March 20-22nd, the new park system has truly been on the receiving end of praise this season for its amazing conditions and adaptability to these big name tours. Whether you are a novice or Pro rider or skier, there is something for everyone at Carinthia.

Mount Snow is in the process of replacing miles of snowmaking pipe across the mountain to maximize the 645 new low-energy fan guns and is building a new 120 million gallon snowmaking pond, called West Lake, and are hoping to move forward with plans to build a new base lodge in the Carinthia area. They have a master plan to expand the resort, which includes updating the Main Base Area and the Sundance/Snow Lake Area and adding residential units.

All content from Kiddle encyclopedia articles (including the article images and facts) can be freely used under Attribution-ShareAlike license, unless stated otherwise. Cite this article:
Mount Snow Facts for Kids. Kiddle Encyclopedia.