Mowbray is a suburb of Launceston in the Australian state of Tasmania and is the site of Mowbray Racecourse, home of the Launceston Cup. Mowbray also contains the minor suburbs of Mowbray Heights and Vermont. The suburb of Mowbray is located on a flat-topped, alluvial shelf, known as Mowbray Hill (formerly Paint Mine Hill), roughly 28m above the Tamar River and its flood plains.

The name "Mowbray" was adopted from an early homestead property formerly located within what is now the Launceston Church Grammar School, it was named and owned by Martin Mowbray Stephenson. The Mowbray Racecourse was a substantial part of this property, and racing meets have been held there from as early as 1830. The name itself stems back to Normandy in France and literally means 'mud hill'. 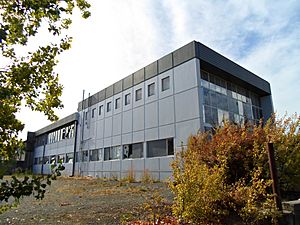 Suburban development did not occur in Mowbray until the late 1800s when a small grid of streets was laid out on the southern slopes of the hill on the eastern side of Invermay Road and a lone street (Button Street) extending towards Launceston Church Grammar School. After WW1 more streets were added north of Button Street and Vermont Road, forming a crude grid extending north towards Newnham, east towards the racecourse and west towards the escarpment where the hill drops into the Tamar. These streets were named after allied soldiers and commanders who took part in the war such as Haig Street, named after Sir Douglas Haig, nicknamed the Butcher of the Somme.

All content from Kiddle encyclopedia articles (including the article images and facts) can be freely used under Attribution-ShareAlike license, unless stated otherwise. Cite this article:
Mowbray, Tasmania Facts for Kids. Kiddle Encyclopedia.