The mud snake (Farancia abacura) is a species of nonvenomous, semiaquatic, colubrid snake endemic to the southeastern United States. 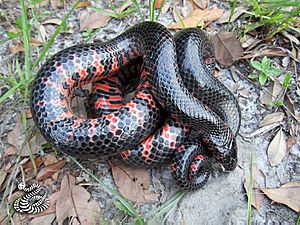 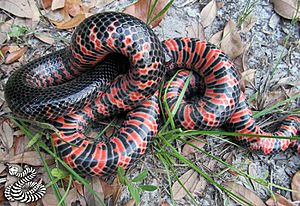 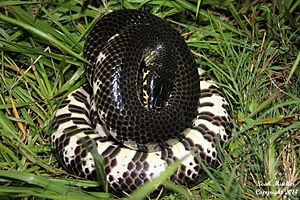 The upperside of the mud snake is glossy black. The underside is red and black, and the red extends up the sides to form bars of reddish-pink. Although, some have a completely black body with slightly lighter black spots instead of the common reddish colors.

The heavy body is cylindrical in cross section, and the short tail has a terminal spine.

F. abacura inhabits the edges of streams and cypress swamps, among dense vegetation or under ground debris. It is almost fully aquatic and rarely leaves the water, except to lay eggs, hibernate, or during drought to escape drying wetlands.

The mud snake is mostly aquatic and nocturnal. It preys mostly on giant aquatic salamanders in the genera Siren and Amphiuma, but it also eats other amphibians. They are known to use their sharply pointed tails to prod prey items, leading to the nickname "stinging snake", although their tail is not a stinger and cannot sting.

Breeding of F. abacura takes place in the spring, mostly in the months of April and May. Eight weeks after mating, the female lays 4 to 111 eggs in a nest dug out of moist soil, sometimes in alligator nests. She will remain with her eggs until they hatch, in the fall, usually September or October. Although unhatched eggs have not been found in the winter or spring, many juvenile mudsnakes are captured entering wetlands in the spring, most likely from clutches deposited and hatched in the preceding late summer or autumn. It is thought that mudsnake hatchlings either enter aquatic habitats in the autumn or delay entering them until the spring, but it is not known if they remain in a terrestrial nest or disperse into terrestrial habitats during this time.

The mud snake is one of a few animals which may be the origin of the hoop snake myth. J.D. Willson writes:

The hoop snake myth has also been attributed to the coachwhip snake.

All content from Kiddle encyclopedia articles (including the article images and facts) can be freely used under Attribution-ShareAlike license, unless stated otherwise. Cite this article:
Mud snake Facts for Kids. Kiddle Encyclopedia.