A cypress dome is a type of freshwater forested wetland, or a swamp, found in the southeastern part of the United States. They are dominated by the Taxodium spp., either the bald cypress (Taxodium distichum), or pond cypress (Taxodium ascendens). The name comes from the dome-like shape of treetops, formed by smaller trees growing on the edge where the water is shallow while taller trees grow at the center in deeper water. They usually appear as circular, but if the center is too deep, they can form a “doughnut” shape when viewed from above. Cypress domes are characteristically small compared to other swamps, however they can occur at a range of sizes, dependent on the depth. 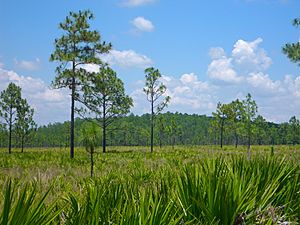 A cypress dome in the background

Cypress domes are the most common swamp habitat in Florida. Most abundant in Central Florida, they also occur in other areas of Florida north of the Florida Keys. South Florida cypress domes are found in southern Florida, in particular in and around the Everglades and the Big Cypress National Preserve. They are distinguished from southern coastal plain cypress domes by the presence of tropical understory species.

The water levels of dome swamps are naturally fluctuating and dependent on seasonal rainfall. Dome swamps derive most of their water through runoff from surrounding uplands. They also may be influenced by groundwater when they are directly connected to the aquifer. Groundwater particularly impacts the hydrology during periods of drought. Dome swamps can recharge the aquifers, acting as reservoirs. The average hydroperiod for a dome swamp is approximately 180 to 270 days per year. The water is deepest and remains the longest in the center of the dome. Prolonged dry and wet periods have a huge effect on cypress regeneration. Adult cypress trees are tolerant to extended periods of inundation, however their seeds cannot germinate under water and may not survive.

Cypress swamps occur in fire maintained communities. Fire is essential for maintaining the structure and species composition in these communities. Without periodic fires, cypress may become less dominant. Cypress are tolerant to light surface fires, due to their thick, fire-resistant bark. Surface fires act as a mechanism to remove potential competitors without tolerance and resilience to fires. However, catastrophic fires that burn into the peat can be detrimental to cypress trees, especially when there has been a long period with no fires. Catastrophic wildfires can alter the ground surface and transform a dome swamp into other types of wetlands, such as a wet prairie or shrub bog. Fire frequency is greatest along the edge of the dome and least moving inwards. Along the edge, the normal fire period may be three to five years, whereas the center may be as long as 100 to 150 years. Due to cypress domes having a more variable hydroperiod, cypress domes tend to have more natural fires than larger cypress forests. Fire patterns impact the quality of ecological services provided by cypress domes, for example carbon storage and hydrologic storage.

Plant species that occur in cypress domes include: 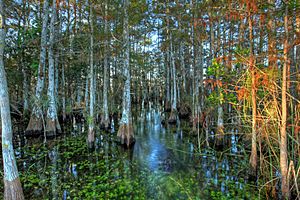 The major threat to cypress swamps are humans. Anthropogenic alterations have negative impacts including hydrological modifications, logging, increased nutrients, pollution from agricultural runoff, and invasion of exotic species. Conversion of surrounding lands to urban development, pastures, and agriculture can impede natural fires and changes the hydrology. Changing the hydroperiods of cypress domes may limit reproduction of natural species and increase likelihood of invasive species. Invasive species threaten native species through competition for light, nutrients, and space.

Dome swamps have been used as a timber resource since the late 19th century. The rapid harvesting of cypress trees has made it difficult for them to regenerate and made them especially vulnerable.

In addition, dome swamps are used as areas to treat wastewater. This can cause increased nutrients, organic matter, and minerals to enter the swamp. This can increase aquatic plants, decrease oxygen in the water, and cause declines in native populations. Dome swamps treated with sewage may have higher water levels and litter production.

All content from Kiddle encyclopedia articles (including the article images and facts) can be freely used under Attribution-ShareAlike license, unless stated otherwise. Cite this article:
Cypress dome Facts for Kids. Kiddle Encyclopedia.