Mullens is a city in Wyoming County, West Virginia, United States. The population was 1,559 at the 2010 census.

Located in a valley along the Guyandotte River within a mountainous region of southern West Virginia, the town was nearly destroyed by flash flooding in July 2001. While the town has attempted to redevelop with the aid of state and federal recovery money, many local businesses and residents have left the area permanently. 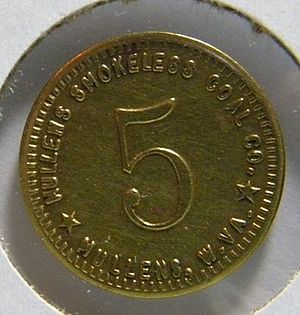 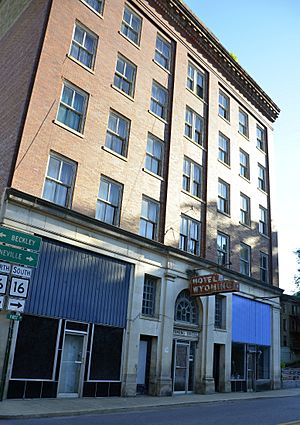 Mullens was incorporated as a town on September 17, 1912 and operated under a charter issued by the Circuit Court of Wyoming County. It was named for A. J. Mullins, who owned the land upon which the town is built. The town's original name was spelled with an "i"; a recording error accounts for the error in spelling, which was never corrected. An Act of the West Virginia Legislature granting a charter to the City of Mullens was passed February 22, 1929.

The early growth of the Mullens community came with development of the lumber and coal mining industries. In the early 20th century, coal-mining manager and developer William Nelson Page of Ansted helped open the Winding Gulf Coalfield with plans for the Deepwater Railway, a new short-line railroad. When Page ran into competitive collusion by the bigger railroads which would have wrecked his project, backed by his silent partner, wealthy industrialist Henry Huttleston Rogers, the plan was expanded in a secretive and massive way to build a line all the way east to the port of Hampton Roads.

Completed in 1909, the Virginian Railway (VGN) established engine terminal and yard facilities near Mullens which employed hundreds of workers during the first half of the 20th century. The VGN was merged with the Norfolk and Western Railway (N&W) in 1959, and both later became part of the Norfolk Southern Railway (NS). A caboose museum in Mullens celebrates the history of the railroad in the region.

The Mullens Historic District was listed on the National Register of Historic Places in 1993. The nearby Wyco Church was listed in 2010.

The climate in this area has mild differences between highs and lows, and there is adequate rainfall year round. According to the Köppen Climate Classification system, Mullens has a marine west coast climate, abbreviated "Cfb" on climate maps.

There were 682 households, of which 27.7% had children under the age of 18 living with them, 45.0% were married couples living together, 9.4% had a female householder with no husband present, 5.6% had a male householder with no wife present, and 40.0% were non-families. 36.4% of all households were made up of individuals, and 18% had someone living alone who was 65 years of age or older. The average household size was 2.29 and the average family size was 3.01.

All content from Kiddle encyclopedia articles (including the article images and facts) can be freely used under Attribution-ShareAlike license, unless stated otherwise. Cite this article:
Mullens, West Virginia Facts for Kids. Kiddle Encyclopedia.