The Muscogee Nation, or Muscogee (Creek) Nation, is a federally recognized Native American tribe based in the U.S. state of Oklahoma. The nation descends from the historic Muscogee Confederacy, a large group of indigenous peoples of the Southeastern Woodlands. Official languages include Muscogee, Yuchi, Natchez, Alabama, and Koasati, with Muscogee retaining the largest number of speakers. They commonly refer to themselves as Este Mvskokvlke (IPA: [isti məskógəlgi]). Historically, they were often referred to by European Americans as one of the Five Civilized Tribes of the American Southeast.

Boundaries of the Five Tribes

The Muscogee Nation is headquartered in Okmulgee, Oklahoma and serves as the seat of tribal government. The Muscogee Nation's Reservation status was affirmed in 2020 by the decision of the United States Supreme Court in Sharp v. Murphy, which held that the allotted Muscogee Nation reservation in Oklahoma has not been disestablished and therefore retains jurisdiction over tribal citizens in Creek, Hughes, Okfuskee, Okmulgee, Mayes, McIntosh, Muskogee, Rogers, Seminole, Tulsa, and Wagoner counties in Oklahoma.

In 2019, the total population of Muscogee citizens was 87,344. Oklahoma accounted for 65,070 of this population, with California accounting for 4,787 and Texas with some 4,466 citizens. Tulsa, Oklahoma was the city most populated with citizens at 11,194. The population is split exactly in half, 50% of the citizens are female and 50% are male, with the age range of 18-54 dominating. The criteria for Citizenship are to be Creek by Blood and trace back to a direct ancestor listed on the 1906 Dawes Roll by issuance of birth and/or death certificates. The Citizenship Board office is governed by a Citizenship Board consisting of five members. This office provides services to citizens of the Muscogee Nation of Oklahoma or to potential citizens in giving direction or assisting in the lineage verification process of the Muscogee people. The mission of this office is to verify the lineage of descendants of persons listed on the 1906 Dawes Roll. In doing so, research is involved in the whole aspect of attaining citizenship. The Director of the Citizenship Board is Nathan Wilson. 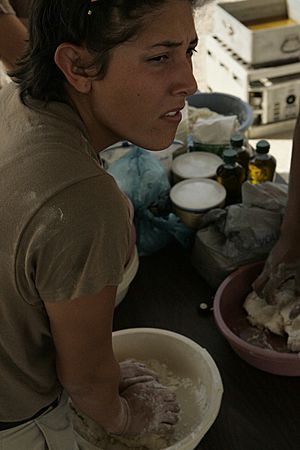 The Nation operates its own division of housing and issues vehicle license plates. Their Division of Health contracts with Indian Health Services to maintain the Creek Nation Community Hospital and several community clinics, a vocational rehabilitation program, nutrition programs for children and the elderly, and programs dedicated to diabetes, tobacco prevention, and caregivers.

The Muscogee Nation operates the Lighthorse Tribal Police Department, with 43 active employees. The tribe has its own program for enforcing child support payments.

The Mvskoke Food Sovereignty Initiative is sponsored by the nation. It educates and encourages tribal members to grow their own traditional foods for health, environmental sustainability, economic development, and sharing of knowledge and community between generations.

The tribe operates a budget in excess of $290 million, has more than 4,000 employees, and provides services within their jurisdiction. 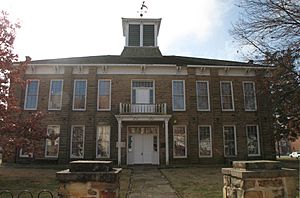 The Creek National Capitol, also known as the Council House, was built in 1878 and is located on a landscaped city block in downtown Okmulgee. Exterior walls of the symmetrical Italianate building are constructed of rough-faced sandstone in a coarse ashlar pattern with paired brackets at the cornice. The building measures 100 by 80 feet with two identical entrances on both the north and south elevations. A bracketed porch with a balcony above covers each entrance and 6-over-6, double-hung sash windows line the exterior walls. The hipped roof is crowned with a square wooden cupola, which originally housed bells to call tribal leaders to meetings. The inside of the building is centrally divided by a stair hall, creating an east and west side. The stairs lead to a similarly divided second story. The House of Warriors had a large meeting room on the east side, while the House of Kings had a meeting room, referred to as the Supreme Court Room, on the west side. The capitol served as a meeting place for the legislative branches of the Muscogee Nation until 1907, when Oklahoma became a state. Tribal business in the capitol ended in 1908, when Congress authorized the possession of tribal lands, effectively ceasing tribal sovereignty. From the time of statehood to 1916, the Council House served as the Okmulgee County Courthouse. In 1926, Oklahoma Native Will Rogers visited Okmulgee to entertain a crowd of nearly 2,000. While doing so, he said that it was important to maintain buildings like the Creek National Capitol, since people were speculating on what they would use the Capitol for now that its legislative use had expired. His words had an impact, considering the building is still standing to this day. Since then, the building has served as a sheriff’s office, Boy Scout meeting room, and a YMCA. In 1961, the building was designated as a National Historic Landmark. By 1979, tribal sovereignty had been fully renewed and the Muscogee adopted a new constitution. The Creek Council House underwent a full restoration in 1989–1992 and reopened as a museum operated by the City of Okmulgee and the Creek Indian Memorial Association. In 2010, the Muscogee Nation purchased the building back from the City of Okmulgee for $3.2 million. It now serves as a museum of tribal history, which is open to the public and exhibits Native American History and culture. 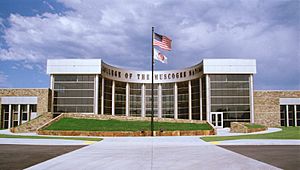 College of the Muscogee Nation

In 2004, the Muscogee Nation founded a tribal college in Okmulgee, the College of the Muscogee Nation (CMN), one of only 38 Tribal Colleges in the US. CMN is a two-year institution, offering associate degrees in Tribal Services, Police Science, Gaming, and Native American Studies. It offers Mvskoke language, Native American History, Tribal Government, and Indian Land Issue classes as well. The CMN offers financial aid through FAFSA and offers on-campus housing. For the spring trimester in 2018, individual student enrollment was 197. A needs assessment survey revealed that a majority of Muscogee citizens were interested in attending the tribal college. Of 386 tribal citizens from the 8 districts, 86% of those were interested in attending college responded that they would attend a tribal college. When asked if they had others in their family who were interested in attending a tribal college 25% of the survey sample responded yes.

The nation includes the Muscogee people and descendants of their African-descended slaves who were forced by the US government to relocate from their ancestral homes in the Southeast to Indian Territory in the 1830s, during the Trail of Tears. They signed another treaty with the federal government in 1856.

During the American Civil War, the tribe split into two factions, one allied with the Confederacy and the other, under Opothleyahola, allied with the Union. There were conflicts between pro-Confederate and pro-Union forces in the Indian Territory during the war. The pro-Confederate forces pursued the loyalists who were leaving to take refuge in Kansas. They fought at the Battle of Round Mountain, Battle of Chusto-Talasah, and Battle of Chustenahlah, resulting in 2,000 deaths among the 9,000 loyalists who were leaving. 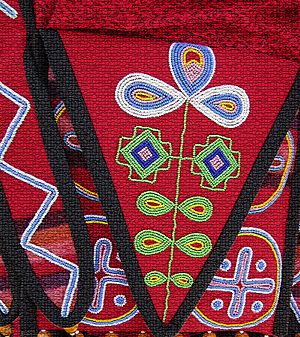 After defeating the Confederacy, the Union required new peace treaties with the Five Civilized Tribes, which had allied with that insurrection. The Treaty of 1866 required the Creek to abolish slavery within their territory and to grant tribal citizenship to those Creek Freedmen who chose to stay in the territory; this citizenship was to include voting rights and shares of annuities and land allotments. If the Creek Freedmen moved out to United States territory, they would be granted United States citizenship, as were other emancipated African Americans.

The Muscogee established a new government in 1866 and selected a new capital of Okmulgee. In 1867 they ratified a new constitution to incorporate elements of the new peace treaty, and their own desire for changes.

They built their capitol building in 1867 and enlarged it in 1878. Today the Creek National Capitol is a National Historic Landmark. It now houses the Creek Council House Museum, as more space was needed for the government. During the prosperous final decades of the 19th century, when the tribe had autonomy and minimal interference from the federal government, the Nation built schools, churches, and public houses.

At the turn of the century, Congress passed the 1898 Curtis Act, which dismantled tribal governments in another federal government attempt to assimilate the Native American people. The related Dawes Allotment Act required the break-up of communal tribal landholdings to allot land to individual households. This was intended to encourage adoption of the European-American style of subsistence farming and property ownership. It also was a means to extinguish Native American land claims and prepare for admitting Indian Territory and Oklahoma Territory as a state, which took place in 1907.

The government declared that communal land remaining after allotments to existing households was "surplus". It was classified as excess and made available for sale to non-Natives. This resulted in the Muscogee and other tribes losing control over much of their former lands.

In the hasty process of registration, the Dawes Commission registered tribal members in three categories: they distinguished among "Creek by Blood" and "Creek Freedmen," a category where they listed anyone with visible African ancestry, regardless of their proportion of Muscogee ancestry; and "Intermarried Whites." The process was so confused that some members of the same families of Freedmen were classified into different groups. The 1906 Five Civilized Tribes Act (April 26, 1906) was passed by the US Congress in anticipation of approving statehood for Oklahoma in 1907. During this time, the Muscogee had lost more than 2 million acres (8,100 km2) to non-Native settlers and the US government.

Later, when Muscogee communities organized and set up governments under the 1936 Oklahoma Indian Welfare Act, some former Muscogee tribal towns reorganized that were in former Indian Territory and the Southeast. Some descendants had remained there and preserved cultural continuity. Others reorganized and gained recognition later in the 20th century. The following Muscogee groups have gained federal recognition as tribes: the Alabama-Quassarte Tribal Town, Kialegee Tribal Town, and Thlopthlocco Tribal Town of Oklahoma; the Coushatta Tribe of Louisiana, the Alabama-Coushatta Tribe of Texas, and the Poarch Band of Creeks in Alabama.

The Muscogee Nation did not reorganize its government and regain federal recognition until 1970. This was an era of increasing Native American activism across the country. In 1979 the tribe ratified a new constitution that replaced the 1866 constitution. The pivotal 1976 court case Harjo v. Kleppe helped end US federal paternalism. It ushered in an era of growing self-determination. Using the Dawes Rolls as a basis for determining membership of descendants, the Nation has enrolled more than 58,000 members, descendants of the allottees.

Historic Muscogee people are listed in the Muscogee article.

All content from Kiddle encyclopedia articles (including the article images and facts) can be freely used under Attribution-ShareAlike license, unless stated otherwise. Cite this article:
Muscogee Nation Facts for Kids. Kiddle Encyclopedia.