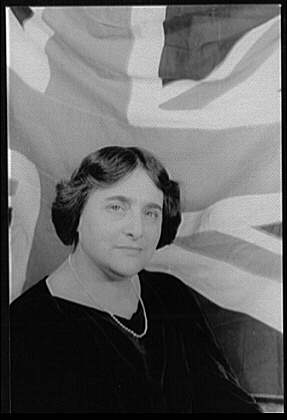 Dame Julia Myra Hess, DBE (25 February 1890 – 25 November 1965) was an English pianist, best known for her performances of the works of Bach, Mozart, Beethoven and Schumann.

Hess was born on 25 February 1890 to a Jewish family in South Hampstead, London. She was the youngest of four children, and began piano lessons at the age of five. She studied at the Guildhall School of Music and at the Royal Academy of Music under Tobias Matthay. 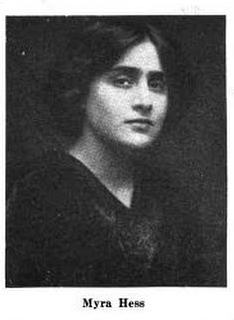 Her debut came in 1907 when she played Beethoven's Piano Concerto No. 4 with Sir Thomas Beecham conducting. She went on to tour through Britain, the Netherlands and France. Upon her American debut (in New York City on 24 January 1922), she became a prime favourite in the United States, as a soloist and ensemble player.

Hess garnered greater fame during the Second World War when, with all concert halls blacked out at night to avoid being targeted by German bombers, she organised almost 2,000 lunchtime concerts, starting during The Blitz. The concerts were held at the National Gallery, in Trafalgar Square. Hess began her lunchtime concerts a few weeks after the start of the war. They were presented on Monday to Friday, for six-and-a-half years without fail. If London was being bombed, the concert was moved to a smaller, safer room. Every artist was paid five guineas, no matter who they were.

In all, Hess presented 1,698 concerts seen by 824,152 people; she personally played in 150 of them. She made a brief appearance performing at one of her lunchtime concerts in the 1942 wartime documentary Listen to Britain (directed by Humphrey Jennings and Stewart McAllister), a performance enjoyed by the Queen in the audience.

For this contribution to maintaining the morale of the populace of London, King George VI created her a Dame Commander of the Order of the British Empire in 1941. (She had previously been created a CBE in 1936.) Hess's lunchtime concerts influenced the formation of the City Music Society, according to the organisation's website.

In 1946, Arturo Toscanini invited Hess to perform with the NBC Symphony Orchestra in New York City. According to Toscanini's biographer Mortimer Frank, after Hess and the conductor had failed to agree on tempos for Beethoven's Fifth Piano Concerto, they decided instead to perform Beethoven's Third. The 24 November 1946 broadcast concert was preserved on transcription discs and later issued on CD by Naxos Records.

Hess was most renowned for her interpretations of the works of Mozart, Beethoven and Schumann, but had a wide repertoire, ranging from Domenico Scarlatti to contemporary works. She gave the premiere of Howard Ferguson's Piano Sonata and his Piano Concerto. She also played a good amount of chamber music and performed in a piano duo with Irene Scharrer. Hess promoted public awareness of the piano duet and two-piano works of Schubert.

In 1926 and 1934 she famously arranged, for both solo piano and for two pianos the chorale Wohl mir, daß ich Jesum habe from Bach's Cantata Herz und Mund und Tat und Leben (BWV 147). This is Movement 6 of the cantata; the music is the same for Movement 10, Jesus bleibet meine Freude. Her arrangement was published under the title Jesu, Joy of Man's Desiring, which is a translation of neither of these German titles but, roughly, of the unrelated work Jesu, meiner Seelen Wonne by Martin Janus (or Jahn). The chorale melody, written in 1641, is by violinist Johann Schop, not by Bach, who composed its setting. 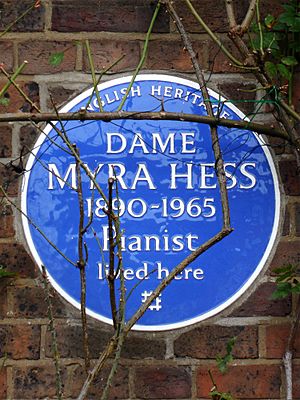 Her protégés included Clive Lythgoe and Richard and John Contiguglia. She also taught Stephen Kovacevich (then known as Stephen Bishop). She also has a link to jazz, having given lessons in the 1920s to Elizabeth Ivey Brubeck, mother of Dave Brubeck.

Arnold Bax's 1915 piano piece In a Vodka Shop is dedicated to her.

In September 1961, Hess played her final public concert at London's Royal Festival Hall. She was forced to retire after suffering a stroke in early 1961 that left her with permanent brain damage. By the end of the summer of that year it became clear that her public playing days were over. She continued to teach a handful of students, notably Stephen Kovacevich, during her last years.

On 25 November 1965, Hess died at the age of 75 of a heart attack in her London home. A blue plaque marks her residence at 48 Wildwood Road in London.

Hess' Steinway piano remains at the Bishopsgate Institute and has been renamed "Myra The Steinway" in her honour.

In 1977, the Chicago Cultural Center began a series of free lunchtime concerts held at its Preston Bradley Hall every Wednesday from 12:15 pm to 1:00 pm, named in Hess's honour as the Dame Myra Hess Memorial Concerts. The series is produced by Chicago's International Music Foundation. Since 1977, the concerts have been broadcast live on radio station WFMT and streamed at WFMT.com.

All content from Kiddle encyclopedia articles (including the article images and facts) can be freely used under Attribution-ShareAlike license, unless stated otherwise. Cite this article:
Myra Hess Facts for Kids. Kiddle Encyclopedia.