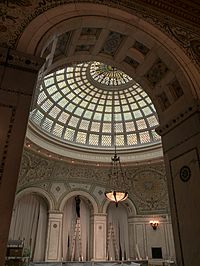 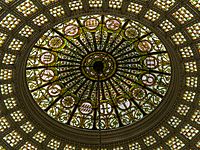 The Chicago Cultural Center, opened in 1897, is a Chicago Landmark building operated by Chicago's Department of Cultural Affairs and Special Events that houses the city's official reception venue where the Mayor of Chicago has welcomed Presidents and royalty, diplomats and community leaders. It is located in the Loop, across Michigan Avenue from Millennium Park. Originally the central library building, it was converted in 1977 to an arts and culture center at the instigation of Commissioner of Cultural Affairs Lois Weisberg. The city's central library is now housed across the Loop in the spacious, postmodern Harold Washington Library Center opened in 1991.

As the nation's first free municipal cultural center, the Chicago Cultural Center is one of the city's most popular attractions and is considered one of the most comprehensive arts showcases in the United States. Each year, the Chicago Cultural Center features more than 1,000 programs and exhibitions covering a wide range of the performing, visual and literary arts. It also serves as headquarters for the Chicago Children's Choir. MB Real Estate provides events management for the center.

Architecture of the Chicago Cultural Center

The building was designed by Boston architectural firm Shepley, Rutan and Coolidge for the city's central library, and Grand Army of the Republic (GAR) meeting hall and memorial in 1892. The land was donated by the GAR and the building was completed in 1897 at a cost of nearly $2 million (equivalent to $51.06 million in 2018). It is organized as a 4-story north wing (77 East Randolph entrance) and a 5-story south wing (78 East Washington entrance), 104 feet tall, with 3-foot-thick (0.91 m) masonry walls faced with Bedford Blue Limestone on a granite base, and designed in a generally neoclassical style with Italian Renaissance elements. It is capped with two stained-glass domes, set symmetrically atop the two wings. Key points of architectural interest are as follows:

Crossroads: Modernism in Ukraine, 1910-1930 was a display of art by Ukrainian artists, such as Sukher Ber Rybak, Vsevolod Maskymovych, and Oleksandr Bohomazov to name a few. Crossroads was organized by the Foundation for International Arts and Education with the National Art Museum of Ukraine. It is presented by the Chicago Department of Cultural Affairs and the Kyiv Committee of the Chicago Sister Cities International Program. The exhibition ran from July 22, 2006 - October 15, 2006.

In 2017, Kerry James Marshall was commissioned to produce the inaugural mural entitled “Rush More”. Located on the west façade of the cultural center, the piece was intended to be an homage to women who have contributed to the culture of Chicago.

Washington painted the mural on a scale rendering of the building. The piece was then transposed to the actual façade by the muralist Jeff Zimmerman. Financing for the project was made possible by the non-profit, Murals of Acceptance and through philanthropic donations from David Arquette, Patricia Arquette, Marc Benioff, and Lynne Benioff.

All content from Kiddle encyclopedia articles (including the article images and facts) can be freely used under Attribution-ShareAlike license, unless stated otherwise. Cite this article:
Chicago Cultural Center Facts for Kids. Kiddle Encyclopedia.