Nanoblock (Japanese: ナノブロックcode: ja is deprecated , Hepburn: Nanoburokku) is a line of construction toys manufactured by Kawada, a toy company based in Tokyo, Japan.

The Nanoblock range includes original designs and licensed sets. Kawada is currently releasing four original series. The Miniature collection series features miniatures designs of animals, musical instruments and Christmas themes. All sets contain around 80-150 pieces. The Sights to See series includes designs of world landmarks and notable buildings with sets ranging in size from 200-600 bricks. The Advanced Hobby series also features notable buildings and landmarks but on a larger scale. The sets in the series are all over 2000 pieces. The largest set is Neuschwanstein Castle deluxe edition, with 5,800 pieces. The fourth series is aimed at girls with themes including weddings and birthdays. 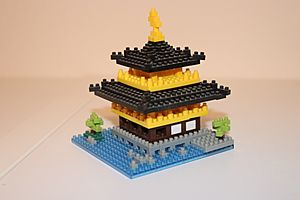 Kawada has created sets based on various licenses including The Adventures of Tintin, Pokémon, Shaun the Sheep and Sanrio characters including Cinnamoroll, Hello Kitty, KeroKeroKeroppi and My Melody. A series of sets based on Disney characters is sold exclusively at the Tokyo Disneyland and Tokyo DisneySea theme parks. In 2013 it was announced Kawada would produce two sets based on Capcom's Mega Man video game franchise as part of the series' 25th anniversary. In 2015, four sets based on characters from the video game franchise Street Fighter were released. The four characters produced were Ryu, Chun-Li, Guile and Dhalsim. Also in 2015, camera giant Nikon partnered with Kawada to recreate its Nikon F camera in a set.

Nanoblocks are similar in design to a Lego brick but smaller, with the smallest brick being 4 mm × 4 mm × 5 mm. The bricks are 1⁄8 the size of Kawada's Diablock line of bricks. The underside of the bricks are different from Lego bricks because they use a dividing flange, known as the double-ridged backing system, instead of the tube system that Lego employs. The bricks are made using ABS plastic and there are eleven different types, the biggest being an 8×2 brick and the smallest a single stud brick.

All content from Kiddle encyclopedia articles (including the article images and facts) can be freely used under Attribution-ShareAlike license, unless stated otherwise. Cite this article:
Nanoblock Facts for Kids. Kiddle Encyclopedia.