The Napier-Hastings Urban Area lies mostly on the Heretaunga Plains of the Hawke's Bay Region in New Zealand and is a conurbation surrounding the twin cities of Napier and Hastings. It is the sixth most populous urban area in the country, with 131,000 residents, just slightly fewer than Tauranga (134,400).

While the two cities remain separated by 9 km (5.6 mi) of rural land from city edge to edge (20 km from one city centre to the next), there is sufficient economic and social integration between the cities for Statistics New Zealand to aggregate them into a single unit. However, like the urban areas of Auckland, Hamilton and Wellington, the Napier-Hastings urban area is subdivided into urban zones. The urban area contains around three-quarters of the population of the entire Hawke's Bay.

If Hastings and Napier were to amalgamate they would become the sixth most populous city in New Zealand following Tauranga. 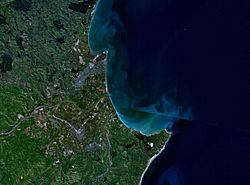 Satellite photo of southern Hawke Bay, including all of the Napier-Hastings Urban Area

Hawke's Bay is one of the most seismically active regions in New Zealand, and as so Napier-Hastings has experienced many large and often damaging earthquakes in the past. More than 50 damaging earthquakes have rocked the area since the European colonisation in the 1800s. Some of the more notable are listed below.

Amalgamation is an ongoing debate for Napier and Hastings residents. Both cities have previously had smaller amalgamations (Napier absorbed Taradale, Hastings absorbed Havelock North in the local government reforms of 1989).

A proposal in 2015 was for the new council to also absorb the Wairoa and Central Hawkes Bay councils to make a super regional council of 150,000 people. This amalgamation referendum was held in September 2015, the majority of voters (~66%) rejected the proposal in favour of the status quo.

Part of recognition of New Zealand's 5th largest population centre is being labelled that way. Many residents have bought forth renaming the city to reflect this to the rest of the nation instead of referring to the cities by their current separate names. Names proposed include:

All content from Kiddle encyclopedia articles (including the article images and facts) can be freely used under Attribution-ShareAlike license, unless stated otherwise. Cite this article:
Napier-Hastings Urban Area Facts for Kids. Kiddle Encyclopedia.