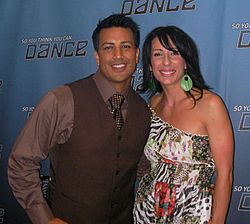 Napoleon and Tabitha D'umo backstage after the So You Think You Can Dance season four finale.

Napoleon Buddy D'umo (born October 17, 1968) and Tabitha A. D'umo (née Cortopassi born September 11, 1973), also known as Nappytabs, are husband and wife choreographers who are often credited with developing the new style of hip-hop dance known as lyrical hip-hop. They have been working together in the dance industry since 1996 and are best known for their choreography on the TV show So You Think You Can Dance. They were nominated for a 2009 Emmy Award for Outstanding Choreography for their work on the fourth season of the show. Napoleon and Tabitha were also supervising choreographers on MTV's America's Best Dance Crew for the first five seasons.

Napoleon and Tabitha started their career in Las Vegas while they were still in college choreographing industrial musicals for large businesses. After moving to Los Angeles, they began teaching hip-hop dance classes and choreographing for professional basketball and football dance teams including the Orlando Magic and the Dallas Cowboys. Their career improved to choreographing music videos, commercials, movies, television shows, and concerts. Napoleon and Tabitha have worked with entertainers such as Missy Elliott, Celine Dion, Kanye West, Ricky Martin, and Jennifer Lopez. They have also choreographed for Cirque Du Soleil. In addition to choreography and teaching classes, they direct concert tours and live events and have their own dance clothing line called Nappytabs.

While growing up in Victorville, California, Napoleon learned how to dance by traveling to Los Angeles and spending time with b-boys; he was eventually cast as an extra in the movie Breakin' 2: Electric Boogaloo in 1984. After graduating from Apple Valley High School, Napoleon joined the US military and was sent to Germany. After he was discharged from the military, he attended the University of Nevada, Las Vegas (UNLV) where he majored in molecular biology. In college, Napoleon started taking jazz dance and modern dance classes. He eventually received a full scholarship as a member of the university's dance team.

Tabitha grew up in Galloway, New Jersey. Her mother enrolled her in jazz dance classes when she was young. Since there were no hip-hop classes, Tabitha learned by watching music videos and participating in her high school's cheer and dance teams. She names Michael Jackson, Janet Jackson, and Paula Abdul as influences. After graduating from Absegami High School, Tabitha moved to Nevada to attend UNLV where she majored in communications and started taking hip-hop dance classes. It was there that she met her future husband Napoleon.

Tabitha and Napoleon started their professional partnership in 1996 while still in college as part of the dance company Culture Shock. During their time with Culture Shock, they choreographed a variety of industrial musicals—musicals performed for the employees of a business to motivate/entertain—for companies such as Nike, Levi, Redken, Matrix Hair, and MAC. Although Tabitha was planning to take a job in public relations and Napoleon was planning to attend medical school, they both decided when they graduated college to pursue a career in the dance industry.

Napoleon and Tabitha have choreographed for sports teams, movies, television, and for the stage. They have choreographed for NFL and NBA dance teams including the Dallas Cowboys, Denver Broncos, Chicago Bulls, and Orlando Magic. Some of the celebrities they have worked with include Sean Kingston, Jennifer Lopez, Carrie Underwood, Celine Dion, Missy Elliott, Destiny's Child, and Timbaland.

The great thing about this show is that we've really explored a totally new thing which is lyrical hip-hop and [Tabitha and Napoleon] nail it. This show has shown that hip-hop is just a completely legitimate beautiful genre in and of its own and you can tell such beautiful and heart breaking stories.

This routine was later nominated for a 2009 Emmy Award for Outstanding Choreography. In an interview with DanceInforma.com Tabitha stated that they do not create choreography without a story because the story determines the movement and the feeling they want to show: "We listen to the song over and over and over and finally we find that skeleton and then we can start preparing some steps."

In April 2009, Napoleon and Tabitha choreographed three dance routines for the second season of So You Think You Can Dance Australia. SYTYCD Australia judge and choreographer Matt Lee called their "Dead and Gone" lyrical hip-hop routine the best routine of the season. Later that year in September, Napoleon and Tabitha choreographed the opening dance performance on the season seven premiere of The Ellen Degeneres Show. The performance featured both DeGeneres and the top 10 dancers from season five of So You Think You Can Dance.

Napoleon and Tabitha have their own line of dance clothing line called Nappytabs. Nappytabs is the first line of hip-hop dance clothing. They decided to create it because of the lack of appropriate dance clothing for urban hip-hop dancers. For this reason, it is only sold at selected regional dance clothing stores, major dance conventions, online through the Nappytabs official website, and at their only retail location and dance studio in North Hollywood.

In 2007, Tabitha was the host of an exercise DVD titled Drop it with Dance. The video is split into six 10-minute routines that gradually increase in difficulty; movements from all six routines are combined in the finale "Showtime" segment. Tabitha also appeared in Rock Your Body, a dance/fitness DVD hosted by choreographer and creative director Jamie King who is known primarily for his work with Madonna.

Napoleon and Tabitha appeared in the dance documentary MOVE. The movie is about dance as an art form and how notable choreographers were able to go from dancing as a hobby to dancing as a career. There are over fifty dance professionals who appear in this movie including director and choreographer Kenny Ortega.

In 2009, Tabitha and Napoleon were nominated for an Emmy Award for the lyrical hip-hop routine "Bleeding Love" that they choreographed on season four of So You Think You Can Dance. On September 10, 2011, they won an Emmy Award for three routines they choreographed on season seven—"Scars", "Fallin'", and "Outta Your Mind". Three months earlier, Entertainment Weekly magazine made a list of the "25 Best Performances Ever" on the show. Tabitha and Napoleon choreographed four routines on the list.

On August 17, 2014, they won their second Emmy Award for their work on season ten of So You Think You Can Dance.

All content from Kiddle encyclopedia articles (including the article images and facts) can be freely used under Attribution-ShareAlike license, unless stated otherwise. Cite this article:
Napoleon and Tabitha D'umo Facts for Kids. Kiddle Encyclopedia.