"Nasha Niva" is free of state propaganda. It is against Alexander Lukashenko. The government tried to close the newspaper many times. The newspaper got big fines and was left from state circulation. The editors and journalists have been arrested. 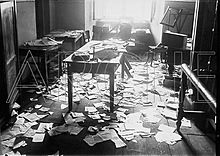 All content from Kiddle encyclopedia articles (including the article images and facts) can be freely used under Attribution-ShareAlike license, unless stated otherwise. Cite this article:
Nasha Niva Facts for Kids. Kiddle Encyclopedia.