The Nashville Zoo at Grassmere is a zoological garden and historic plantation farmhouse located 6 miles (9.7 km) southeast of Downtown Nashville. As of 2014, the zoo was middle Tennessee's top paid attraction and contained 6,230 individual animals, encompassing 339 species. The zoo's site is approximately 188 acres (76 ha) in size. It is an accredited member of the Association of Zoos and Aquariums. 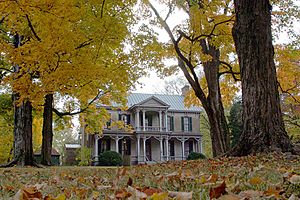 Nashville Zoo is located on property that was once a 300-acre slave holding farm owned by Michael and Elizabeth Dunn. The Dunn's original home, built in 1810 through slave labor, is still located on the property. Margaret and Elise Croft, the great-great granddaughters of Michael Dunn, the original owner, were the last of the family to live at this location. In 1989, archaeologists evaluating the property for its archaeological resources discovered an unmarked cemetery fairly close to Grassmere's entrance off of Nolensville Road. When construction for the zoo began in 1997, this graveyard was not disturbed. It was only in 2013 when a newer entry plaza was planned did the zoo petition to have the bodies exhumed and their remains moved closer to the historic Dunn house by the state archaeologist. This exhumation revealed 9 to 30 African-Americans who had been buried there.

The Croft sisters deeded the land and family home to the Children's Museum of Nashville in 1964, with the agreement the house would remain and the land would be used as a 'nature study center.' After Elise's death in 1985, the museum began work on this nature study center, calling it Grassmere Wildlife Park.

In December 1994, Grassmere Wildlife Park closed. The city of Nashville took over ownership of the property in 1995 and began searching for an independent organization to manage the property. Meanwhile, the Nashville Zoo had opened as a separate, privately owned facility in Joelton, Tennessee, in May 1991. In June 1996, then-Nashville Mayor Phil Bredesen proposed that either the Nashville Zoo be relocated from its Joelton location to Grassmere, or Grassmere be converted to a city park without animals. In October 1996, the Nashville City Council approved the terms of a lease agreement for Nashville Zoo to relocate to Grassmere.

The Nashville Zoo remained open in Joelton. In May 1997, the Nashville Wildlife Park at Grassmere opened. Both the Zoo and the wildlife park remained open, but due to public confusion, the Zoo closed their Joelton site in October 1998 and focused completely on the Grassmere location.

All content from Kiddle encyclopedia articles (including the article images and facts) can be freely used under Attribution-ShareAlike license, unless stated otherwise. Cite this article:
Nashville Zoo at Grassmere Facts for Kids. Kiddle Encyclopedia.