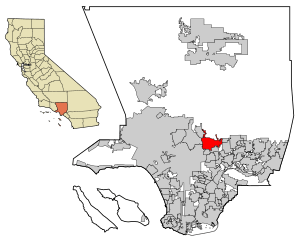 This is a list of the National Register of Historic Places listings in Pasadena, California.

Pasadena's prominence in the cultural, scientific, architectural and sporting history of Southern California is evidenced by the heavy concentration of historic sites in a city with a population of 134,000. Although Pasadena's population is 3.5% that of its large neighbor to the south, Pasadena's total of 125 places compares favorably with more than 200 in Los Angeles.

The first sites in Pasadena to be listed on the Register were Greene and Greene's American Craftsman masterpiece, the Gamble House (built from 1908 to 1909), the Pasadena Playhouse (built in 1924) and Frank Lloyd Wright's textile block structure, the Millard House (built in 1923). Perhaps most famous for hosting the annual football game at the Rose Bowl, Pasadena was also a center of architectural innovation in the early 20th Century as Greene and Greene built their innovative Craftsman-style bungalow houses and larger-scale ultimate bungalows throughout Pasadena, including the Gamble House, Robert R. Blacker House, Dr. W. T. Bolton House and Cordelia A. Culbertson House. Other architects of note who have designed buildings in Pasadena include Myron Hunt (Rose Bowl and California Institute of Technology) and Welton Beckett (Bullock's Pasadena).

Pasadena is the home of many leading scientific and cultural institutions, including the California Institute of Technology (Caltech), the Jet Propulsion Laboratory, the Pasadena Playhouse and the Norton Simon Museum of Art. Several sites relate to Pasadena's long connection with astronomy and space exploration, including the Space Flight Operations Facility, the Twenty-Five-Foot Space Simulator, and Hale Solar Laboratory. Also, the Edwin Hubble House, home to famed astronomer Edwin Hubble, is located in the adjacent community of San Marino.

All content from Kiddle encyclopedia articles (including the article images and facts) can be freely used under Attribution-ShareAlike license, unless stated otherwise. Cite this article:
National Register of Historic Places listings in Pasadena, California Facts for Kids. Kiddle Encyclopedia.