New Vrindaban is an unincorporated area and an ISKCON (Hare Krishna) intentional community located in Marshall County, West Virginia, United States, near Moundsville. The town consists of 1,204 acres (4.87 km2) (of which 0.1 km² is of water), and several building complexes, homes, apartment buildings, and businesses including the Sri Sri Radha Vrindaban Chandra Temple (RVC Temple) and Prabhupada's Palace of Gold. New Vrindaban was founded in 1968 under the direct guidance of A.C. Bhaktivedanta Swami Prabhupada, founder of ISKCON, by his disciple Kirtanananda Swami. It is named for the Indian city of Vrindavan. 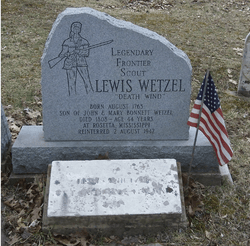 According to the 2010 US Census, the six census blocks that make up New Vrindaban had a population of 352 and had the West Virginia status of unincorporated town. It is bordered on the north and northwest by Big Wheeling Creek, on the East by Stull Run, and on the southwest by the village of Limestone. The town's water and sewage utilities are provided by the New Vrindaban Public Service District, and following the Marshall County Commission's road naming project all streets in New Vrindaban have been fully named. In addition to ISKCON, the town is the location of McCreary Cemetery, resting place of West Virginia pioneer Lewis Wetzel; various locally owned businesses; and other ISKCON-affiliated organizations. The chief components in New Vrindaban's economy are tourism, agriculture, and cottage industries. 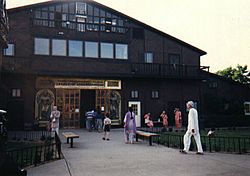 The community was founded in 1968 by Kirtanananda Swami and Hayagriva Swami, two early disciples of A. C. Bhaktivedanta Swami Prabhupada. New Vrindaban developed under the guidance of Kirtanananda Swami (honored as "Srila Bhaktipada" after March 1979), and by the mid-1970s the live-in population had grown to over 100. By the 1980s the population was more than 500.

ISKCON New Vrindaban is strictly vegetarian and believes that meat consumption creates negative karma. Alcoholic beverages and illegal substances (such as drugs) are prohibited in the main holy sites around the Temple of Understanding Circle Drive.

In October, 1986, a census report showed 377 adults living at the community.

On March 16, 1987, during their annual meeting at Mayapur, India, the ISKCON Governing Body Commission expelled Kirtanananda from the society for "moral and theological deviations." The community of New Vrindaban was expelled from ISKCON a year later.

After Kirtanananda Swami left New Vrindaban, and new leadership stabilized, the community was readmitted to ISKCON in 1998. The Pittsburgh Tribune-Review reported in 2006 the population stood at about 100. However, this number only indicated how many people were members listed in the community directory rather than official census numbers. 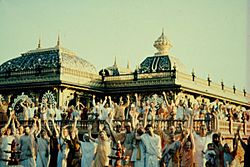 Originally intended in 1972 to be a residence for A. C. Bhaktivedanta Swami Prabhupada, the founder-acharya of the International Society for Krishna Consciousness (ISKCON), the plans evolved after Prabhupada's death in November 1977 for an ornate palace of marble, gold and carved teakwood, which was dedicated as a memorial shrine on September 2, 1979. Kirtanananda Swami, the leader of the New Vrindaban community, and Bhagavatananda das, the community's principal architect and sculptor, were the two primary forces behind its design and construction.

It reportedly cost $600,000 in materials, and the labor was donated by the devotees. The unpaid workers were often untrained and learned on the job.

Kirtanananda explained, "In the beginning, we didn't even know how to lay blocks. As our Krishna consciousness developed, our building skills developed, then our creativity developed, and the scope of the project developed."

Prabhupada's Palace of Gold opened in 1979 to positive reviews. CBS PM Magazine reported, "the magnificence of the Palace of Gold would be hard to exaggerate." Life magazine called the Palace "a place where tourists can come and be amazed." The New York Times proclaimed "Welcome to Heaven." The Washington Post called the palace "Almost Heaven." The Courier-Journal of Louisville stated, "It's hard to believe that Prabhupada's Palace is in West Virginia. In fact, it's hard to believe it's on this planet."

Beginning in the early 1990s lack of sufficient financial resources caused palace maintenance to be neglected; nevertheless, as of 2008, 50,000 tourists and Hindu pilgrims reportedly continued to visit each year. Since mid-2011, an ambitious five-year, $4.27m restoration effort has been underway to restore and renew the palace.

All information is sourced to the following article unless stated otherwise

All content from Kiddle encyclopedia articles (including the article images and facts) can be freely used under Attribution-ShareAlike license, unless stated otherwise. Cite this article:
New Vrindaban, West Virginia Facts for Kids. Kiddle Encyclopedia.