Nickel Mines is a hamlet in Bart Township, Lancaster County, Pennsylvania, USA. The area now has a sizable Amish community. The zip code is 17562 and the area code is 717.

The nickel mines that give the town its name were worked in a deposit of sulfide ore, principally millerite. The mines were originally opened in the early 18th century for copper, but were given up as unproductive. In 1849, the Gap Mining Company attempted to work the mines for copper, again unsuccessfully, but discovered the presence of nickel in late 1852 or early 1853. (The ore had previously been misidentified as iron sulfide). Gap Mining then worked the mines for nickel until 1860, when they were closed as unprofitable. It sold the mine to Joseph Wharton in late 1862. Between 1862 and 1893, 4.5 million pounds of nickel were extracted from the site, up to 25 percent of world production in some years. Wharton refined the nickel in Camden, New Jersey and was the first industrial producer of malleable nickel. He was influential in persuading the United States Mint to issue the first five-cent nickel coins in 1866, using nickel produced from his mines. 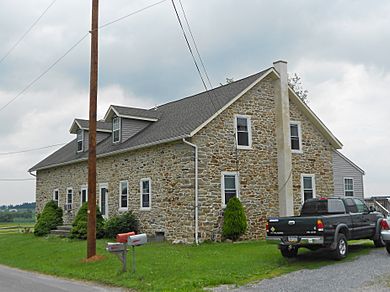 House near the crossroads of White Oaks and Mine Roads

An Episcopal Church was built in 1857 to serve the mining community at the time. In 1883, the town consisted of the superintendent's mansion, 23 miners' homes, a store with dwelling, and five outbuildings.

The mine closed in 1893 because of competition from the new nickel mines in Sudbury, Ontario, Canada. No trace of the mines remains today, except for a few waste dumps. The area is now entirely agricultural.

All content from Kiddle encyclopedia articles (including the article images and facts) can be freely used under Attribution-ShareAlike license, unless stated otherwise. Cite this article:
Nickel Mines, Pennsylvania Facts for Kids. Kiddle Encyclopedia.