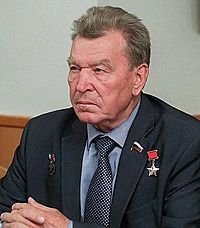 Nikolay Timofeyevich Antoshkin (Russian: Николай Тимофеевич Антошкин; December 19, 1942 – January 17, 2021) was a Russian Air Force colonel general and politician. He was born in Kuzminovka, Soviet Union. He was known for being in charge over the Chernobyl disaster response. He was a member of the State Duma from 2014 until his death. He was a member of the United Russia. Antoshkin was a Hero of the Soviet Union.

All content from Kiddle encyclopedia articles (including the article images and facts) can be freely used under Attribution-ShareAlike license, unless stated otherwise. Cite this article:
Nikolay Antoshkin Facts for Kids. Kiddle Encyclopedia.