Niverville was first settled by the Dutch; the first house was built circa 1707 by Louren Lourenson Van Alen, who obtained the Kinderhoeck Patent—a land grant—in 1629 from Jan Hendrickse DeBruyn, including the area now known as Niverville. Located within the hamlet, Kinderhook Lake—originally called Wogasawoochuk or "Big Fish Lake" by the Mohican early Native American inhabitants—provided fertile, peat-rich soil that supported numerous orchards and farms.

The Niver cousins—John Niver and John M. Niver—emigrated to the area from Germany in the early nineteenth century. They built the first gristmill for rye flour; their prosperity built the Niver mansion just across the bridge along County Route 28 in 1848. The hamlet was ultimately named "Niverville" after the prosperous Nivers, although it was long known as Kinderhook Station, after its Boston and Albany Railroad, and Kinderhook and Hudson Railroad turntable, built in 1841. The railroad restaurant known as the Van Hoesen House (not to be confused with the Jan Van Hoesen House some 20 miles south in Claverack) has since become the Niverville Pub, serving the area with live music entertainment on a regular schedule. 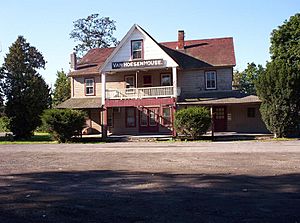 The Van Hoesen House, a.k.a. Kinderhook Station on the Boston & Albany Railroad, as seen in 2005

In 1846, the Niverville Post Office was established with less than twenty business and residential addresses. Niverville's first park—Kinderhook Lake Park, aka The Old Park—was established in 1870 as a picnic and meeting place.

By 1899 the railroad trolleys were electrified and Niverville's Electric Park was founded along Kinderhook Lake. Lit by colored lights, the amusement park featured two Ferris wheels (one run by steam, the other by electricity), a carousel, a roller coaster, and other rides, as well as live vaudeville performances held in a dancing pavilion, an aquarium stocked with native fish, and a bathing beach alongside the lake's popular boating and fishing activities.

Niverville is served by the nearby Valatie Free Library, a member of the Mid-Hudson Library System.

According to the United States Census Bureau, the area has a total area of 3.4 square miles (8.9 km2), of which 2.9 square miles (7.4 km2) is land and 0.54 square miles (1.4 km2), or 15.94%, primarily Kinderhook Lake. The lake is located along Valatie Kill, a southwest-flowing tributary of Kinderhook Creek in the Hudson River Valley.

There were 682 households, out of which 33.0% had children under the age of 18 living with them, 58.2% were married couples living together, 8.7% had a female householder with no husband present, and 30.1% were non-families. 23.8% of all households were made up of individuals, and 8.1% had someone living alone who was 65 years of age or older. The average household size was 2.53 and the average family size was 3.02.

All content from Kiddle encyclopedia articles (including the article images and facts) can be freely used under Attribution-ShareAlike license, unless stated otherwise. Cite this article:
Niverville, New York Facts for Kids. Kiddle Encyclopedia.