Valatie ( və-LAY-shə) is a village with several waterfalls in Columbia County, New York, United States. The population was 1,819 at the 2010 census. The village is at the center of the town of Kinderhook on US 9. 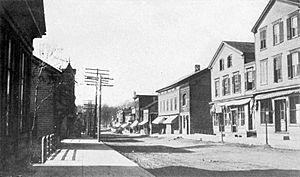 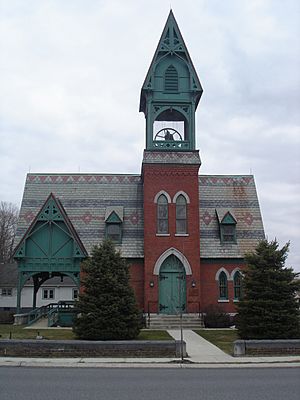 Part of the original New Netherland, the first European settlers were the Dutch who settled Kinderhook around 1665, and named this area "Vaaltje", which means "little falls". The first post office was established in 1832. By the early 19th century there were nine cotton mills in Valatje operating on power derived from the famous waterfalls; the village was incorporated in 1856. With a bustling Main Street, Valatie was considered the center of commerce in northern Columbia County throughout the 19th century.

Prominent architectural landmarks include the First Presbyterian Church of Valatie. This congregation formed in 1835; the high Victorian Gothic Revival-style building designed by Ogden & Wright Architects was built in 1878 of red brick with limestone trim, slate roof and slate dormer windows. It features a porte-cochère and open bell tower. It is listed on the National Register of Historic Places.

The 40th Governor of New York (1913-1914), Martin H. Glynn, was active in the Progressive movement, and a resident of Valatie, where his family operated a tavern (Glynn Tavern) on Main Street. He graduated from Fordham University in 1894, studied at Albany Law School, and was admitted to the New York bar in 1897. From 1896 on, he wrote for the Albany Times-Union daily newspaper, becoming eventually its editor, publisher and owner.

In 1923, Beaver Mill Falls in Valatie was a location for Haldane of the Secret Service, a film produced, directed by, and starring the famed escape artist Harry Houdini.

Valatie is home to the nation's first "Santa Claus Club", founded in 1946 after World War II by fifteen village veterans to provide holiday gifts for several critically ill children. Since that time the scope has widened. Every Christmas Eve, Santa travels throughout the village, personally visiting every child under age ten.

A WinterWalk parade and festival is hosted annually in mid-December by the Valatie Economic Redevelopment Association, in collaboration with the village. The parade is populated by the Kinderhook, Valatie, Niverville, and Stuyvesant fire trucks and rescue vehicles, as well as marching bands from the Ichabod Crane High School and marchers from the Girl Scouts, Cub Scouts, and the Valatie Free Library. Elves and marionettes march along with the vintage and new vehicles. Hay rides stop at various venues along the parade route. A highlight of this winter parade is Santa Claus riding (and waving) in a sleigh. After the parade, Santa parks his sleigh at the historic Valatie Community Theatre, and holds court inside, listening to kids' requests.

The Valatie Free Library was begun in 1928 as a casual circulation of books. It was incorporated in 1931 and moved to a small 600-square-foot (56 m2) 19th-century cottage on Church Street, where it continues to operate. In December 2011, the Board of Trustees selected building designer David Bienn to design a new library in the historic Kinderhook Railroad Freight Barn located on Kinderhook Street. In June 2012, Bienn's proposed library was highlighted with international status by the United Nations at the 2012 "Rio+20" Earth Day Summit in Rio de Janeiro as an iconic sustainable community template that can be replicated across the globe, preserving the ability for libraries and communities to thrive in the future.

Recent immigrants to Valatie include members of the creative class, with musicians, authors, artists, and designers resettling from the NY metro area, as well as Albany commuters. The backdrop of waterfalls at both ends of Main Street is a daily presence that changes with the seasonal rain and snowfall.

In September 2006 the village of Valatie celebrated the 150th anniversary of its incorporation with two parades and a carnival followed by fireworks and live music by the StringMasters, held at Callan Park.

The First Presbyterian Church, Wild's Mill Complex, and Nathan Wild House are listed on the National Register of Historic Places.

Valatie is located in the center of the town of Kinderhook in northern Columbia County. It is part of the Hudson Valley region of New York State. It is 21 miles (34 km) south of Albany, the state capital, and 15 miles (24 km) northeast of Hudson.

Nearby communities within the town of Kinderhook

There were 584 households out of which 36.8% had children under the age of 18 living with them, 49.0% were married couples living together, 12.3% had a female householder with no husband present, and 33.9% were non-families. 28.3% of all households were made up of individuals and 14.4% had someone living alone who was 65 years of age or older. The average household size was 2.51 and the average family size was 3.09.

All content from Kiddle encyclopedia articles (including the article images and facts) can be freely used under Attribution-ShareAlike license, unless stated otherwise. Cite this article:
Valatie, New York Facts for Kids. Kiddle Encyclopedia.