Noank is a village in the town of Groton, Connecticut. This dense community of historic homes and local businesses sits on a small, steep peninsula at the mouth of the Mystic River with a long tradition of fishing, lobstering and boat-building. The village is listed as a historic district on the National Register of Historic Places and is the home of multiple seaside lobster shacks and oyster aquaculture operations. The population was 1,796 at the 2010 census.

In 1614, the area was known as Nauyang (meaning "point of land") and was a summer camping ground of the Pequot people. The Pequots were taken under English protection in 1655 following the Pequot War. The land comprising Noank Peninsula was acquired by James Morgan through a lottery in 1712.

In 1861, Charles Mallory and Elihu Spicer, Jr. established the C. H. Mallory and Company Steamship line. In 1879, Robert Palmer put steam railways into his shipbuilding plant in Noank. His company became one of the largest in the United States at the time for making wooden ships, building one thousand vessels ranging from fishing boats to sound steamers.

Around 1912, the Connecticut State Lobster Hatchery was established in Noank.

The community grew from a tradition of fishing, lobstering, and boat-building and has more ship and boat yards than churches. The fishing sailboat type known as the "Noank Smack" is indigenous to this village, of which the Emma C. Berry is an example. Noank hosts the longest-running continuous Memorial Day parade in the country, held annually since 1875.

Noank has several marinas, including one having 158 slips. 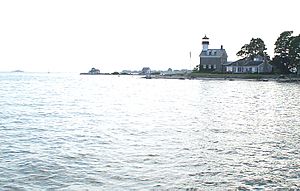 There were 846 households, out of which 21.9% had children under the age of 18 living with them, 51.8% were married couples living together, 6.4% had a female householder with no husband present, and 40.7% were non-families. 35.5% of all households were made up of individuals, and 16.8% had someone living alone who was 65 years of age or older. The average household size was 2.15 and the average family size was 2.78.

All content from Kiddle encyclopedia articles (including the article images and facts) can be freely used under Attribution-ShareAlike license, unless stated otherwise. Cite this article:
Noank, Connecticut Facts for Kids. Kiddle Encyclopedia.