North Dumpling Island is the northernmost of two islands in Fishers Island Sound, located about 0.3 nautical miles (550 m) north of South Dumpling Island. The two-acre (8,000 m²) island is privately owned by Dean Kamen, inventor of the Segway Human Transporter and founder of FIRST, and is home to the North Dumpling Lighthouse. It is a mile (1.6 km) off the coast of Connecticut, south of Groton, Connecticut, but is within the territory of the town of Southold in New York State. 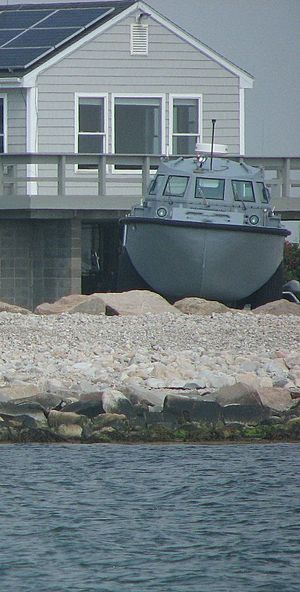 The island was bought by John Winthrop, son of the governor of the Massachusetts Bay Colony, and owned by the Winthrop family until 1847, when it was sold to the federal government to be the site of a lighthouse. In 1959, the beacon was automated and the lighthouse and grounds were sold to a private party. In 1986, Kamen bought it.

After Kamen was denied permission to build a wind turbine on the island, he joked that he was seceding from the United States. The island's electrical system was later converted to a combination of wind and solar power with the help of Fritz Morgan, Chief Technology Officer of Philips Color Kinetics, operating independently of the regional electrical grid. This was accomplished by replacing all lighting on the island with LEDs, which resulted in a 70% reduction of in-house energy consumption. Kamen says that the island is carbon neutral due to solar panels on every building, a 10 kW wind turbine, and a "little" Stirling engine for backup power.

Kamen's secession is not legally recognized, but he still refers to the island as the "Kingdom of North Dumpling" and has established a constitution; a flag; a currency, which is the dumpling; a national anthem, which is the sound of a stone being thrown into water, and a navy consisting of a single amphibious vehicle. The people of North Dumpling are called "Dumplonians", and Kamen is said to refer to himself as "Lord Dumpling" or "Lord Dumpling II". In addition to North Dumpling Lighthouse, the island has a replica of Stonehenge. Despite still being a part of the United States, Kamen was able to leverage his personal relationship with then-president George H.W. Bush to sign an unofficial non-aggression pact.

All content from Kiddle encyclopedia articles (including the article images and facts) can be freely used under Attribution-ShareAlike license, unless stated otherwise. Cite this article:
North Dumpling Island Facts for Kids. Kiddle Encyclopedia.