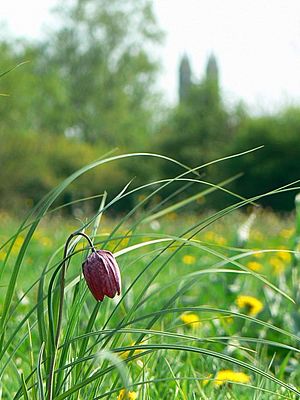 A snake's head fritillary in the North Meadow, Cricklade

North Meadow, Cricklade is a hay meadow near the town of Cricklade, in Wiltshire, England. It is 24.6 hectares in size. It is a traditionally managed lowland hay-meadow, or lammas land, and is grazed in common between 12 August and 12 February each year, and cut for hay no earlier than 1 July. This pattern of land use and management has existed for many centuries and has resulted in the species rich grassland flora and fauna present on the site.

Over 250 species of higher plant occur in the meadow, but it is of particular note as it holds by far the largest British population of the snake's-head fritillary (Fritillaria meleagris). The 500,000 fritillaries which flower each year represent 80% of the British population.

The meadow is situated between two rivers, the Thames and the Churn, and the unique habitat for the fritillary was created by regular winter flooding. Such meadows were once common in Britain, but with the advent of modern farming many were drained and ploughed for arable crops from the 1730s onwards. In the case of North Meadow, it escaped such a fate by virtue of the preservation of the Court Leet, the Saxon system of town governance which made sure the land was held in common. The land is managed by Natural England and is run with the support of the Court Leet. The ancient Hay Lot stones which once marked local farmers' plots can still be seen within the meadow.

The meadow was notified as a biological Site of Special Scientific Interest in 1971. Part of the site has been designated a national nature reserve.

The meadow also supports a large variety of birds, including great tits, blue tits, common chaffinches, linnets and treecreepers within the bordering hedges; whilst grey wagtails, reed buntings, sedge warblers, swallows, sand martins and swifts can be found around the rivers and ditches.

All content from Kiddle encyclopedia articles (including the article images and facts) can be freely used under Attribution-ShareAlike license, unless stated otherwise. Cite this article:
North Meadow, Cricklade Facts for Kids. Kiddle Encyclopedia.