Filipendula ulmaria, commonly known as meadowsweet or mead wort, is a perennial herb in the family Rosaceae that grows in damp meadows. It is native throughout most of Europe and Western Asia (Near east and Middle east). It has been introduced and naturalised in North America. 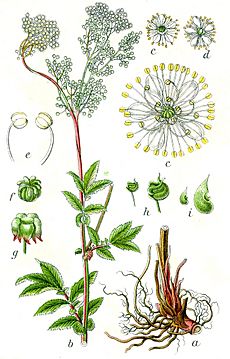 The stems are 1–2 m (3.3–6.6 ft) tall, erect and furrowed, reddish to sometimes purple. The leaves are dark-green on the upper side and whitish and downy underneath, much divided, interruptedly pinnate, having a few large serrate leaflets and small intermediate ones. Terminal leaflets are large, 4–8 cm long, and three- to five-lobed.

Meadowsweet has delicate, graceful, creamy-white flowers clustered close together in irregularly-branched cymes, having a very strong, sweet smell. They flower from early summer to early autumn and are visited by various types of insects, in particular Musca flies.

The flowers are small and numerous, they show 5 sepals and 5 petals with 7 to 20 stamens.

Many insects and fungi cause disease in meadowsweet. 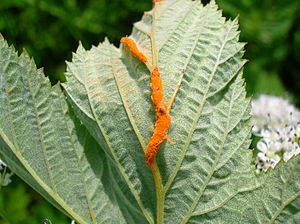 Meadowsweet leaves are commonly galled by the bright orange-rust fungus Triphragmium ulmariae, which creates swellings and distortions on the stalk and/or midrib.

The fungus Ramularia ulmariae causes purple blotches on the leaves.

The fungus Podosphaera filipendulae causes mildew on the leaves and flower heads, coating them with a white powder.

The midge Dasineura ulmariae causes pinkish-white galls on the leaves that can distort the leaf surface.

Meadowsweet is known by many other names. In Chaucer's The Knight's Tale it is known as meadwort and was one of the ingredients in a drink called "save". It was also known as bridewort, because it was strewn in churches for festivals and weddings, and often made into bridal garlands. In Europe, it took its name "queen of the meadow" for the way it can dominate a low-lying, damp meadow.

The name ulmaria means "elmlike", possibly in reference to its individual leaves which resemble those of the elm (Ulmus). Like slippery elm bark, the plant contains salicylic acid, which has long been used as a painkiller. However, the generic name, Filipendula, comes from filum, meaning "thread" and pendulus, meaning "hanging". This is said to describe the root tubers that hang characteristically on the genus, on fibrous roots. 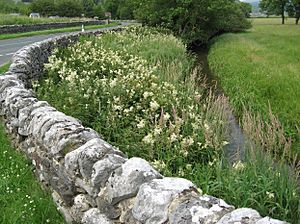 Meadowsweet is common throughout the British Isles in damp areas and is dominant in fens and wet woods.

The whole herb possesses a pleasant taste and flavour, the green parts having a similar aromatic character to the flowers, leading to the use of the plant as a strewing herb, strewn on floors to give the rooms a pleasant aroma, and its use to flavour wine, beer, and many kinds of vinegar. The flowers can be added to stewed fruit and jams, giving them a subtle almond flavor. It has many medicinal properties. The whole plant is a traditional remedy for an acidic stomach, and the fresh root is often used in homeopathic preparations. Dried, the flowers are used in potpourri. It is also a frequently used spice in Scandinavian varieties of mead.

A natural black dye can be obtained from the roots by using a copper mordant.

A tea made from Filipendula ulmaria flowers or leaves has been used in traditional Austrian herbal medicine for the treatment of rheumatism, gout, infections, and fever.

White-flowered meadowsweet has been found with the cremated remains of three people and at least one animal in a Bronze Age cairn at Fan Foel, Carmarthenshire. Similar finds have also been found inside a beaker from Ashgrove, Fife, and a vessel from North Mains, Strathallan. These could indicate honey-based mead or flavoured ale, or might suggest the plant placed on the grave as a scented flower.

In Welsh mythology, Gwydion and Math created a woman out of oak blossom, broom, and meadowsweet and named her Blodeuwedd ("flower face").

In the 16th century, when it was customary to strew floors with rushes and herbs (both to give warmth underfoot and to overcome smells and infections), it was a favorite of Elizabeth I of England. She desired it above all other herbs in her chambers.

All content from Kiddle encyclopedia articles (including the article images and facts) can be freely used under Attribution-ShareAlike license, unless stated otherwise. Cite this article:
Meadowsweet Facts for Kids. Kiddle Encyclopedia.