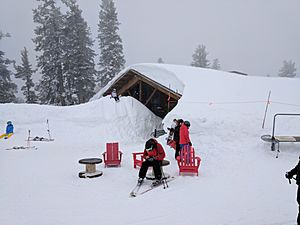 The Summit Smokehouse, at the peak of Mt. Pluto, nearly snowed in, in 2017.

Northstar California (previously Northstar-at-Tahoe) is a mountain resort in the western United States, located in Placer County, California, near the northwest shore of Lake Tahoe.

Northstar was a former lumber site once owned by the Douglas Lumber Company of Truckee and was acquired by Fibreboard when they purchased Douglas in 1967. Its original name was Timber Farm, but was changed to Northstar-at-Tahoe when the mountain opened 50 years ago in December 1972. The first ski resort amenities included 5 chairlifts. The trails were designed by Luggi Foeger, an Austrian, who had fled Europe during World War II.

In 2007, CNL Lifestyle Properties acquired Northstar, which since 2010 has been operated under a triple-net lease by Vail Resorts. Vail also owns Heavenly Ski Resort and Kirkwood Mountain Resort both at Lake Tahoe, four other ski resorts in Colorado, including Vail, Breckenridge, Keystone, and Beaver Creek, and other ski resorts. Previously, Northstar had been owned by Booth Creek, a holdings company managed by George Nield Gillett Jr., the owner of the now defunct Gillett Holdings, a former owner of Vail Associates.

In 2016 EPR Properties agreed to purchase Northstar California in a package deal along with multiple other properties from CNL Lifestyle Properties for approximately $456 Million.

Northstar features 3,170 acres of terrain, with 60% of trails designated for intermediate skiers. Grooming on trails is well-established and offers many "groomers" for resort visitors. In 2015, Ski Magazine listed the resort as the 24th best ski area in the western United States.

According to resort sources, the annual snowfall at Northstar is 350 inches per year. Snow totals are measured at the mountain summit and are counted from the first snowfall until closing day. 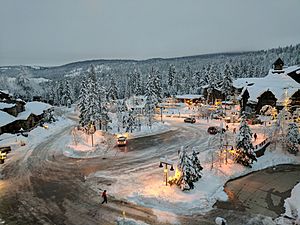 The Village Circle dropoff area at Northstar California, seen from the upper floor of the Lodge

Northstar Village is based on a small village layout that centers a square which, in winter, has an ice skating rink.

-The Grille at Sawtooth Ridge

Panorama of "Lower Lion's Way" ski trail, just below the top of The Big Easy chairlift

All content from Kiddle encyclopedia articles (including the article images and facts) can be freely used under Attribution-ShareAlike license, unless stated otherwise. Cite this article:
Northstar California Facts for Kids. Kiddle Encyclopedia.