Oakley is a city in Cassia County, Idaho, United States. The population was 763 at the 2010 census, up from 668 in 2000. It is part of the Burley Micropolitan Statistical Area.

The city was named for William Oakley, the proprietor of a 19th-century stagecoach station located at a spring currently located about 2 miles west of the present townsite known as Oakley Meadows. David B. Haight, former member of the Quorum of the Twelve Apostles, of The Church of Jesus Christ of Latter-day Saints was born in Oakley. The small hamlet has served as home to a surprising number of famous Americans. The former governors of Utah and Massachusetts can trace their stock to Oakley. Jon Huntsman of Utah is the grandson of David B. Haight, above, and Mitt Romney, of Massachusetts is the son of another famous Oakley-ite, George Romney. Yet another Oakley Romney, Marion G. Romney, was a Counselor in the First Presidency of The Church of Jesus Christ of Latter-day Saints. 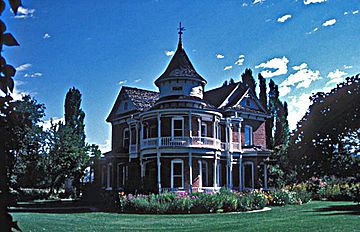 Victorian house in Oakley Historic District on the National Register of Historic Places.

Oakley is also rich in old west lore, such as the tale of Diamondfield Jack, and another story of intrigue, the story of Gobo Fango.

This town of fewer than 800 people has turned out leaders in politics, business, and entertainment. The town is also home to the current Idaho House of Representatives Speaker Scott Bedke.

Oakley has become recognized worldwide for its Middle Mountain quarries of Rocky Mountain quartzite building stone known as Oakley Stone. Quarry operators ship out thousand of tons a month to locations around the globe.

Today, many people remark that Oakley is the very last "Mayberry" left in America, and frequently visited for its Victorian homes.

There were 248 households, of which 37.9% had children under the age of 18 living with them, 67.3% were married couples living together, 8.5% had a female householder with no husband present, 1.6% had a male householder with no wife present, and 22.6% were non-families. 21.4% of all households were made up of individuals, and 11.3% had someone living alone who was 65 years of age or older. The average household size was 3.08 and the average family size was 3.60.

Oakley is in the Cassia County School District.

Oakley is zoned to:

All of the schools are in the city of Oakley.

The high school has about 120 students, and the elementary has about 250 students. The high school's football team won the Idaho State Football Championship in 2007, and 2009 and took 2nd place in 2008,

All content from Kiddle encyclopedia articles (including the article images and facts) can be freely used under Attribution-ShareAlike license, unless stated otherwise. Cite this article:
Oakley, Idaho Facts for Kids. Kiddle Encyclopedia.