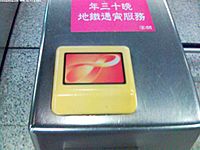 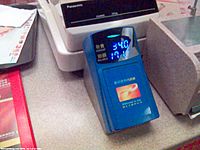 Octopus card reader at a McDonald's restaurant in Central

The Octopus card is a reusable contactless stored value smart card for making electronic payments in Hong Kong. Started in September 1997 to collect fares for the MTR, the Octopus card system is the second contactless smart card system in the world, after the Korean Upass, and has been widely used for all public transport in Hong Kong, It leads to the development of Oyster Card in London.

Baat Daaht Tùng (Cantonese Pronounciation) translates as "eight-arrived pass" (in Chinese it was accepted as "go-everywhere pass"), where Baat Daaht may translate as "reaching everywhere". It was selected by the head of the MTR, the parent company of Octopus Cards Limited, in a naming competition held in 1996.

All content from Kiddle encyclopedia articles (including the article images and facts) can be freely used under Attribution-ShareAlike license, unless stated otherwise. Cite this article:
Octopus card Facts for Kids. Kiddle Encyclopedia.