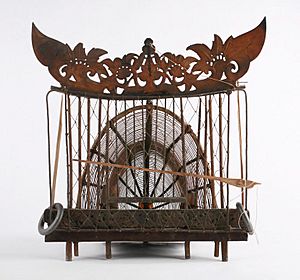 A quail trap from Malaysia, also known as the jebak puyuh: A female quail was placed in the woven container behind the netting. As the female called out, a male mate would approach and then the trap would fall on him. Quails are now rarely found in the wild in Malaysia, so such devices now serve as decoration.

Old World quail is a collective name for several genera of mid-sized birds in the pheasant family Phasianidae.

New World quail are also found in the Galliformes, but are not in the same family (Odontophoridae). Buttonquails are not closely related at all, but are named for their similar appearance. They are presently placed in the family Turnicidae of the Charadriiformes, more closely related to shorebirds, gulls and auks.

The collective noun for a group of quail is flock, bevy or covey.

Old World quail may refer to the following species of Phasianidae:

Old World quail are small, plump terrestrial birds. They are seed eaters, but will also take insects and similar small prey. They nest on the ground and are capable of short, rapid bursts of flight. Some species, such as the Japanese and common quail, are migratory and fly for long distances.

Migrating common quail are known to eat some poisonous seeds with no apparent ill effects but store the poison in their body fat, poisoning people who subsequently eat these birds; this condition is known as "coturnism".

All content from Kiddle encyclopedia articles (including the article images and facts) can be freely used under Attribution-ShareAlike license, unless stated otherwise. Cite this article:
Old World quail Facts for Kids. Kiddle Encyclopedia.