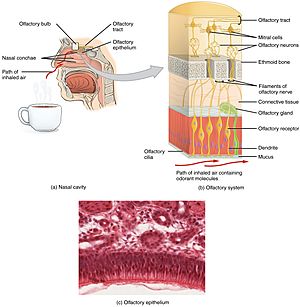 The olfactory system is the sensory system used for olfaction or the sense of smell.

Most mammals and reptiles have two parts to their olfactory system.

The olfactory system is often spoken as being similar to the gustatory system (taste system). Both are chemosensory senses. They change chemical signals into nerve impulses, which are translated into perceptions in the brain. 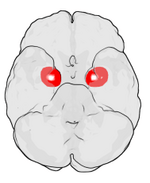 Position of mygdala in each hemisphere of the human brain

The part of the brain which deals with olfaction is the rhinencephalon, a small part in the human brain, but much more important in other vertebrates. The piriform cortex is probably the area most closely associated with identifying the odor. The medial amygdala is involved in social functions such as mating and recognising animals of the same species. The entorhinal cortex pairs odors with memories. The exact functions of these higher areas is still being researched.

Linda B. Buck and Richard Axel won the 2004 Nobel Prize in Physiology or Medicine for their work on the olfactory system. By analyzing rat DNA, they estimated that there were about one thousand different genes for olfactory receptors in the mammalian genome.

Damage to the olfactory system can happen through brain injury, cancer or toxic gases. The damage is usually measured by doctors giving the patient something to smell and having the patient try to guess what it is.

All content from Kiddle encyclopedia articles (including the article images and facts) can be freely used under Attribution-ShareAlike license, unless stated otherwise. Cite this article:
Olfactory system Facts for Kids. Kiddle Encyclopedia.