Omemee is a ghost town in Bottineau County in the U.S. state of North Dakota. It was a railroad hub in the early 1910s, located at the junction of two major railroads, the Soo Line Railroad and the Great Northern Railway. Incorporated as a city in 1902, Omemee has been abandoned since 2003. 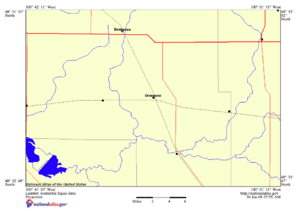 Map with Omemee at center

Omemee was founded in 1887 in Willow Vale Township. It is named after Omemee, Ontario, in Canada, which was the hometown of Omemee's first post master. Omemee itself is an alternate spelling of the Ojibwe word omimi, meaning "dove." The post office opened in 1890 and closed in 1967, with mail service transferring to nearby Willow City. The town was incorporated in 1902 and was moved slightly in 1903 to the junction of the Great Northern Railway and the Soo Line Railway in 1903. Omemee disincorporated as a city prior to the 1990 Census. It currently has no population.

A 1906 review by the North Dakota Department of Agriculture and Labor indicated Omemee was the fourth largest town in Bottineau County. However, by the time it was founded, the cities of Bottineau and Willow City had grown to dominate trade in the region. Omemee, located between both towns was at a disadvantage, since many farmers had grown accustomed to doing business in those towns. Many predicted its status as a hub between two railroads would lead to substantial growth, making Omemee the railroad center of Bottineau County. 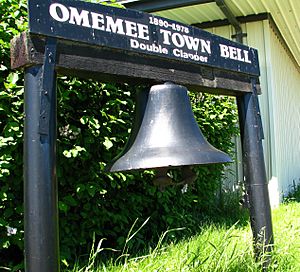 Town Bell of Omemee, ND, now on display in front of the Bottineau Country Historical Museum.

In 1906, the town already boasted numerous businesses, including general stores, banks, hotels, a restaurant, school, opera house, and a newspaper, the Omemee Herald. Omemee Brick Company operated a plant three miles north of town. The town also claimed it had "one of the best brass bands in the state" at 22 members, and the only musical organization in the state with "a quartette of saxophones [sic.]".

However, the lack of a townsite company to promote the town, the predicted population boom never came and the town declined in later years.

In 1998, the Canadian Museum of Rail Travel in Cranbrook, British Columbia, British Columbia, bought and restored a 1906 sleeper car. Originally built by Barney and Smith Car Company, the railcar was previously owned by a former Soo Line Railroad employee, and was named Omemee in honor of the old rail station. The car is now on permanent display at the museum. Today, nothing remains of the town except for an abandoned electric line and two crumbling buildings.

The town bell of Omemee now hangs on display in front of the Bottineau County Historical Museum in Bottineau, N.D.

Omemee is located in the eastern part of Bottineau County. It lies in the Souris River basin, which is part of the ancient lake bed of Lake Souris, a large glacial lake in the area responsible for much of the surrounding geology. East of the town, undulations of the prairie rise often ten feet above the adjoining hollows. These swells form the moranic hills which were not entirely leveled down by the waves of the lake. The high and rugged hills of the same moraines beyond the lake shore show how much the action of the waves leveled the hills which were deposited in the waters of the lake.

The city had a high population of 650 in 1906, but by the 1910 Census it had declined to 332. The population fluctuated until the 1970 Census when the recorded population was just 5 people. However, the 1980 Census showed a population increase to 10 people.

When Omemee disincorporated, the 1990 Census reported only three remaining residents. The area reverted to Willow Vale Township, which recorded a 2000 Census population of 34.

German settlers established an evangelical church in Omemee in the early 1900s.

All content from Kiddle encyclopedia articles (including the article images and facts) can be freely used under Attribution-ShareAlike license, unless stated otherwise. Cite this article:
Omemee, North Dakota Facts for Kids. Kiddle Encyclopedia.