The city is home to Dakota College at Bottineau. Attractions in Bottineau include the Bottineau Winter Park and "Tommy Turtle," the world's largest turtle, which has become a landmark for the city. Built in 1978 and thirty feet (9 m) in height, the fiberglass turtle is located in the eastern half of the city and was built as a symbol for the nearby Turtle Mountains. The International Peace Garden is nearby to the northeast.

Bottineau is also home to Programmer's Broadcasting, which owns and operates KBTO, along with KTZU and KWGO in Minot. 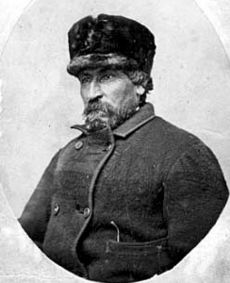 Bottineau was founded in 1883 as Oak Creek as a customs station and an overnight stagecoach stop. The town name was changed to Bottineau in 1884 in honor of Pierre Bottineau (c.1814-1895), a Métis pioneer, hunter, and trapper who became a successful land speculator.

The town was originally located about 1.5 miles north of its current location. The entire town was moved south in 1887 to where the Great Northern Railway was installing new tracks.

In 2012 a new chalet called Annie's House was built in Bottineau Winter Park (16 km North of Bottineau). The facility will be North Dakota's first ski facility for handicapped children and wounded veterans. It is being built to honor Ann Nicole Nelson, who was the only North Dakotan to die in the September 11 attacks on the World Trade Center in New York City.

There were 972 households, of which 23.3% had children under the age of 18 living with them, 43.5% were married couples living together, 8.8% had a female householder with no husband present, 3.0% had a male householder with no wife present, and 44.7% were non-families. 41.0% of all households were made up of individuals, and 21.7% had someone living alone who was 65 years of age or older. The average household size was 2.02 and the average family size was 2.71. 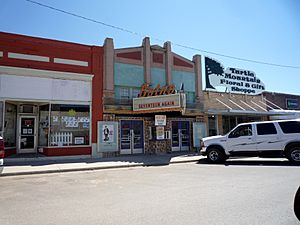 The economy in Bottineau is based on agriculture and recreational activities.

The city's commercial district consists mainly of small local shops, but a Wal-Mart Supercenter store is now operating within Bottineau; some consider this unusual for a town of such a small size. Bottineau is also home to the Bottineau County Fair, which is the state's oldest county fair.

All content from Kiddle encyclopedia articles (including the article images and facts) can be freely used under Attribution-ShareAlike license, unless stated otherwise. Cite this article:
Bottineau, North Dakota Facts for Kids. Kiddle Encyclopedia.