Turtle Mountain, or the Turtle Mountains, is an area in central North America, in the north-central portion of the U.S. state of North Dakota and southwestern portion of the Canadian province of Manitoba, approximately 100 km south of the city of Brandon on provincial highway 10. It is a plateau 2,000 ft (600 m) above sea level, 300 ft to 400 ft (90 m to 120 m) above the surrounding countryside, extending 20 mi (32 km) from north to south and 40 mi (64 km) from east to west. Rising 1,031 feet, North Dakota's most prominent peak, Boundary Butte, is located at the western edge of the plateau.

It has timber, numerous lakes, and small deposits of low-grade manganese. One of the largest lakes in the Turtle Mountains is Lake Metigoshe, which straddles the international border, with about one-eighth of the lake in Canada. The region is home to Turtle Mountain Provincial Park, a state park, two historic sites, and various hunting and fishing opportunities.

Turtle Mountain is the traditional territory of the Plains Ojibwe, as well as part of the Métis homeland. Rapid colonization and settlement in the 19th century, along with the establishment of a firm border between Canada and the United States, displaced many Indigenous peoples to and from the region. Some identify as the Turtle Mountain Chippewa, who are federally recognized and whose reservation in the valley on the southeastern edge of the plateau.

The Plains Ojibwe have a long established history in the Turtle Mountain region and the surrounding area. East of Turtle mountain at Pembina lived one Ojibwe group, as well as a number of Métis families. The Métis hunted and fished in the Turtle Mountains and increasingly moved westward from Pembina in search of declining buffalo populations. When the federal government agreed that Pembina would be a part of the United States in 1818, the Métis living there, along with a number of Chippewa with kinship ties to the Métis, and some Ojibwe claimed land near Turtle Mountain. The federal government recognized and designated this group the Pembina Band, but this did not include all the Ojibwe peoples already established at Turtle Mountain. The misidentification of all Ojibwe as part of the Pembina Band has prevented their full assertion of rights. Throughout the 19th century, the Pembina band was broken up and dispossessed of their lands as the government opened up the area for settlement. Among these groups are the Turtle Mountain Chippewa, and the Little Shell Tribe of Chippewa. 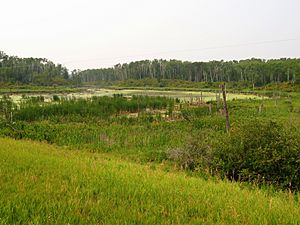 Following the discovery of coal in 1879 there was coal mining in the Turtle Mountains near Old Deloraine town site in Manitoba and along ravines on the western flank of Turtle Mountain. The Lennox mine opened in 1883 and mining continued intermittently at the Voden, McArthur, McKay, and Manitoba Coal Company mines until 1908. When higher quality coal was found elsewhere and the Trans-Canada Railway was built, the mines closed. Small scale coal mining was revived during the Depression because Turtle Mountain lignite was cheaper than higher coal grades from Saskatchewan. Peak annual production of the McArthur, Henderson, Deep Ravine, Salter, Powne, and Deloraine Coal Company mines averaged over 1000 tons each. However, the Salter and Henderson mines produced 95% of Manitoba's coal over a span of about eight years. The last mine closed in 1943 due to labour shortages during World War II and changed economic conditions. The old Deloraine town site is now covered by a man-made lake, made when the Turtle-Head Dam was built.

Communities in the area

All content from Kiddle encyclopedia articles (including the article images and facts) can be freely used under Attribution-ShareAlike license, unless stated otherwise. Cite this article:
Turtle Mountain (plateau) Facts for Kids. Kiddle Encyclopedia.