One Kennedy Square facts for kids

One Kennedy Square is a 10-story building located at 777 Woodward Avenue in Downtown Detroit, Michigan, near Campus Martius Park. The building is bordered by Griswold Street, Michigan Avenue and Woodward Avenue, and stands on the site of the old Detroit City Hall. It is occupied by the Ernst & Young accounting firm. 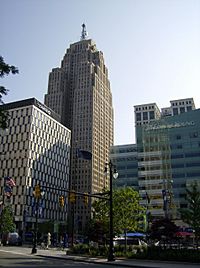 One Kennedy Square with the Penobscot Building in the background

Construction on the mid-rise started in 2005 and was completed in 2006. The building has 13 total floors, with 10 above-ground floors, and 3 basement floors.

One Kennedy Square was designed in the Modern architectural style, constructed with a translucent emerald green tinted glass exhibiting the role of color in architecture amidst Campus Martius Park's other modern foray, the golden topaz Compuware World Headquarters and the charcoal gray granite/glass 1001 Woodward Avenue Building. One Kennedy Square provides a unique backdrop, enlightening a new dimension for the Michigan Soldiers' and Sailors' Monument.

The architect is S. Kenneth Neumann of Neumann/Smith & Associates, the developer is REDICO and the construction manager is Spencer Dailey, Inc.

Nearby buildings include The Qube, the First National Building, 1001 Woodward, Chrysler House, the Penobscot Building, and the Cadillac Tower.

All content from Kiddle encyclopedia articles (including the article images and facts) can be freely used under Attribution-ShareAlike license, unless stated otherwise. Cite this article:
One Kennedy Square Facts for Kids. Kiddle Encyclopedia.