Kids Encyclopedia Facts
This page is about the 47-story tower in Detroit, Michigan. For the original building, see Penobscot Building (1905). For other uses, see Penobscot (disambiguation). 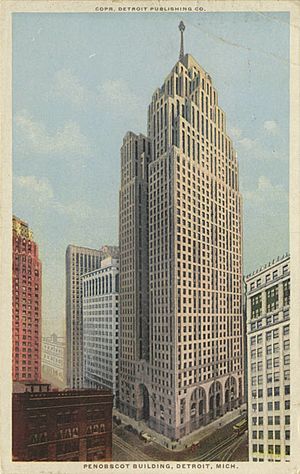 Penobscot Building on a postcard

Upon completion, the Penobscot Building was the eighth-tallest building in the world, the fourth-tallest in America and the tallest outside of New York and Chicago. Rising 566 feet (173 m), the 47-story Penobscot was the tallest building in Michigan from its completion in 1928 until construction of the Renaissance Center hotel tower in 1977. Ally Detroit Center surpassed the Penobscot as the tallest office building in Detroit upon its completion in 1993. The framing elevation drawing of this building shows a height of 562.166 ft (171.348 m) to the highest roof, approximately 565.75 ft (172.44 m) to the parapet wall around the roof, and 654.166 ft (199.390 m) to the top of the warning beacon atop the antenna.

The building is named for the Penobscot, a Native American tribe from Maine. Native American motifs in art deco style ornamentation is used on the exterior and the interiors. The following version of the choice of the name of the building is found in an undated publication believed to have been published concurrent with the buildings dedication in 1928:

An intimation of the Murphy family's early history, together with the expression of genuine sentiment regarding the beginnings of the Murphy fortune, is contained in the name of the Greater Penobscot Building...... Long before the Civil War days, Simon J. Murphy and his partner, then two lads who had grown up in the Maine woods obtained their first employment in one of the logging camps along the Penobscot River - a stream named for the powerful tribe of Penobscot Indians.

The architect Wirt C. Rowland, of the prominent Smith Hinchman & Grylls firm based in Detroit, designed the Penobscot in an elaborate Art Deco style in 1928. Clad in Indiana Limestone with a granite base, it rises like a sheer cliff for thirty stories, then has a series of setbacks culminating in a red neon beacon tower. Like many of the city's other Roaring Twenties buildings, it displays Art Deco influences, including its "H" shape (designed to allow maximum sunlight into the building) and the sculptural setbacks that cause the upper floors to progressively "erode".

The opulent Penobscot is one of many buildings in Detroit that features architectural sculpture by Corrado Parducci. The ornamentation includes American Indian motifs, particularly in the entrance archway and in metalwork found in the lobby. At night, the building's upper floors are lit in floodlight fashion, topped with a red sphere.

The building's architect, Wirt C. Rowland, also designed other Detroit skyscrapers, such as the Guardian Building and the Buhl Building, in the same decade.

The first televisions in Michigan were sold in the retail space on the Griswold level of this building.

For a period of time in the late 1970s and early 1980s, it was renamed the City National Bank Building, after its major tenant. When City National was acquired by another bank and renamed, the historic Penobscot name was revived.

The Penobscot Building is a contributing property in the Detroit Financial Historic District, and on the National Register of Historic Places.

All content from Kiddle encyclopedia articles (including the article images and facts) can be freely used under Attribution-ShareAlike license, unless stated otherwise. Cite this article:
Penobscot Building Facts for Kids. Kiddle Encyclopedia.