The Oriental turtle dove or rufous turtle dove (Streptopelia orientalis) is a member of the bird family Columbidae. That family includes doves and pigeons. 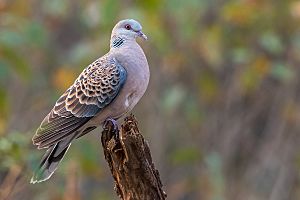 This small species is very similar in plumage to its European counterpart, the turtle dove. It is a little larger than that species, particularly in the case of orientalis, about the same size as a collared dove. It shares the black and white striped patch on the side of its neck made of silver-tipped feathers, but the breast is less pink, and the orange-brown wing feathers of the turtle dove are replaced with a browner hue, and darker centres giving a scaly appearance. The tail is wedge shaped, like the turtle dove. The flight is more relaxed and direct than that of its relative.

The calls are different from the purr of the turtle dove. It is a four-syllable her-her-oo-oo. There are significant call differences within the populations as well.

The westernmost race, meena, breeds in the Western Palearctic region. The southernmost populations are resident, but most other birds migrate south to winter in India, the Maldives, and southern Japan. They disperse widely and are known from islands such as the Lakshadweep in winter. S. o. orientalis occurs as a rarity in western Alaska and British Columbia. It is also a vagrant to northern and western Europe and occurrences in Britain tend to gather much attention from twitchers.

The habitat varies but it breeds in well-wooded but open habitats and winters in more open habitats but usually with good tree cover.

The summer breeding season in the temperate zone can be protracted. In southern India, the breeding season is in winter. In display, the male flaps its wing noisily and shoots up before gliding down with outspread tail. Nests take about two days to build with the male gathering material and the female placing it. The nest is more substantial than in some other doves and is placed at mid-canopy height. In Japan, nests built at a greater height tended to be prone to predation. Males were found to incubate in the day and the female by night. Two white eggs, as for all pigeons and doves, are laid in a twig nest in a tree. Incubation begins immediately after the first egg is laid. The eggs hatch in 15 to 16 days and the chicks take about 15 to 17 days to fledge (in Japan). Both parents feed the chicks with crop milk. Multiple broods may be raised and nests built by the pair or by others may be reused.Nest reuse may possibly increase the chances of predation. In Japan the principal predators of nestlings and eggs were crows and magpies and to a lesser extent by cats and snakes.

This species is known to consume seeds of hemp, sunflower, wheat, millets and amaranth, and gastropods. They forage on the ground.

Nests in Japan that have accumulated faeces have been found to host a number of flies belonging to the families Sphaeroceridae, Sepsidae, and Stratiomyidae.

All content from Kiddle encyclopedia articles (including the article images and facts) can be freely used under Attribution-ShareAlike license, unless stated otherwise. Cite this article:
Oriental turtle dove Facts for Kids. Kiddle Encyclopedia.