O. hymenoides grows in a variety of habitats from desert scrub to ponderosa pine forests. It can live in soils from sand to clay, but it does particularly well in sand, where it is the dominant grass growing with sagebrush, and may occur almost unmixed with other plants. It stabilizes shifting sand. 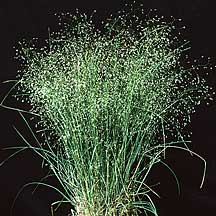 Indian ricegrass is an important food for livestock and for wild grazers such as bison, desert bighorn sheep, elk, mule deer, pronghorns, and jackrabbits. For some of these species, it is especially vital in late winter, as it produces green shoots earlier than other grasses. The seeds are heavily consumed by many rodents and birds, notably mourning doves.

This tough grass is known for its ability to reseed and establish itself on sites damaged by fire or overgrazing. Much germination occurs in years with wet Aprils. It is grown in xeriscapes—cultivars are available—and will become quite large if given sufficient space. The open, spangled appearance when in flower or fruit is very attractive, especially in backlight. The flower stalk is commonly used in dry flower arrangements.

In the past, the grass was a staple food of Native Americans, especially when the maize crop failed, and for non-agricultural tribes. Seed of the ricegrass was gathered and ground into meal or flour and made into bread. Since 2000, the ricegrass has been cultivated in Montana and marketed under the trade name Montina as a gluten-free grain. The Zuni people used the ground seeds as a staple before the availability of corn.

The Utah Section of the Society for Range Management began campaigning for a state grass in the mid-1980s, and after studying many species the field was narrowed to four candidates, Indian ricegrass, bluebunch wheatgrass, galleta grass, and Great Basin wildrye. Indian ricegrass was then selected. The state-grass bill was introduced by Senator Alarik Myrin, a member of the Society, in 1989.

All content from Kiddle encyclopedia articles (including the article images and facts) can be freely used under Attribution-ShareAlike license, unless stated otherwise. Cite this article:
Oryzopsis hymenoides Facts for Kids. Kiddle Encyclopedia.