Otakon ( OH-tə-kon) is an annual three-day anime convention held during July/August. From 1999 to 2016, it took place at the Baltimore Convention Center in Baltimore, Maryland's Inner Harbor district; in 2017, it moved to the Walter E. Washington Convention Center in Washington, D.C. The convention focuses on East Asian popular culture (primarily anime, manga, music, and cinema) and its fandom. The name is a portmanteau derived from convention and the Japanese word otaku.

Otakon is run by the Pennsylvania-based non-profit organization Otakorp, Inc. whose primary purpose "is to promote the appreciation of Asian culture, primarily through its media and entertainment".

Typical Otakon programming includes anime and live action East Asian films shown on big screens in multiple video rooms. Fan-produced content including fan-parodies and anime music videos (AMVs) are also shown. For several years, Otakon had a dedicated 35 mm film theater, but replaced it in 2008 with an HD theater to take advantage of the wider array of offerings in that format. Panels and workshops are held on subjects such as voice acting, how to draw manga, and Japanese culture. Industry professionals announce new acquisitions, and expert guests discuss or show tricks of their trade and field questions from the audience. Many panels and workshops are conducted by fans rather than pros (ex. Create a Comic Project). The convention also includes cosplay and a skit-based Masquerade show, which in the years before the convention moved to Washington D.C. had taken place inside the Royal Farms Arena.

Otakon 2020 was cancelled due to its venue, the Walter E. Washington Convention Center, being converted to a field hospital to treat COVID-19 patients during the ongoing pandemic. 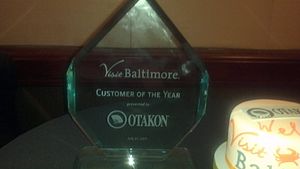 The first Otakon was held at a Days Inn in State College, Pennsylvania in 1994; 350 people attended.

From 1999 to 2016, Otakon was held at the Baltimore Convention Center in Baltimore, Maryland. In 2011, the Baltimore city tourism agency, Visit Baltimore, gave Otakon a "Customer of the Year" award for "demonstrat[ing] ongoing commitment to Baltimore, bringing more than 27,000 attendees to the city every year, a much-anticipated event by the local community and media". Otakon has been a top convention for Baltimore since 2003. Otakon 2009 had an economic impact of $12.5 million in direct spending and booked over 4,500 hotel rooms. According to the Baltimore Business Journal on December 10, 2010, Otakon 2010 had 4,575 booked hotel rooms and an estimated economic impact of $15.3 million, up from $12.5 million the year before; in particular it had significant impact on food vendors.

All content from Kiddle encyclopedia articles (including the article images and facts) can be freely used under Attribution-ShareAlike license, unless stated otherwise. Cite this article:
Otakon Facts for Kids. Kiddle Encyclopedia.