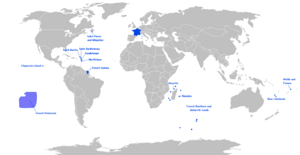 Since 2003, these departments are now officially called overseas regions (French: région d'outre-mer), but this name has yet to be widely adopted. Each region returns elected representatives to the Senate and National Assembly in Paris. A total of three members are elected to the European Parliament to represent overseas France, including overseas departments and overseas territories. Since 1974, these regions have had their own individual regional councils for local government.

All content from Kiddle encyclopedia articles (including the article images and facts) can be freely used under Attribution-ShareAlike license, unless stated otherwise. Cite this article:
Overseas departments of France Facts for Kids. Kiddle Encyclopedia.