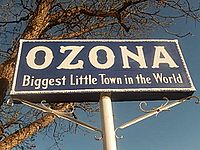 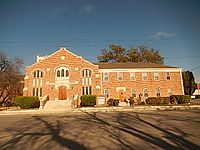 First Baptist Church of Ozona on the town square 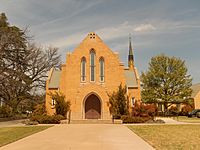 Ozona is an unincorporated community and census-designated place (CDP) that serves as the county seat of Crockett County, Texas, United States. The population was 3,225 at the time of the 2010 census. Ozona is the only Census Bureau–recognized community in Crockett County, which is named for Colonel Davy Crockett, a hero of the Alamo. 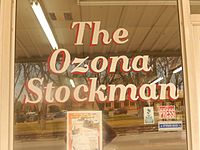 Ozona is called the "Biggest Little Town in the World". Located on Interstate 10 some 200 miles (320 km) west of San Antonio, rural Ozona is also 82 miles (132 km) southwest of San Angelo. Crockett County is one of the nation's leading producers of wool and mohair and is situated in the Edwards Plateau region at the western edge of the Texas Hill Country. Hunters come to Ozona in search of white-tailed deer, javelina, and game birds.

The county was organized in 1891 under a giant oak tree, which still stands and shades the historical marker describing the event. The Davy Crockett Monument is a large statue in the City Park on the town square. Across from the monument is the Crockett County Museum.

A "Heritage Appreciation Monument" honors pioneer families who came to settle the land. The three-story Crockett County Museum at 404 11th Street features a blacksmith shop, ranching artifacts, and a wool/mohair room. A scenic drive from Ozona to Lancaster Hill, west on Texas State Highway 290, provides a panoramic view of the Pecos River Valley.

The British rock band Goldrush recorded an album called Ozona, based on their experiences when their tour bus broke down in the town.

In Cormac McCarthy's All the Pretty Horses, John Grady Cole is held in Ozona after the horses (Redbo, Junior, and Blevins' horse) are impounded after three men swear they have paperwork confirming ownership of the animals. He is eventually given the horses after John Grady tells the story of the plot to the local judge. In the film adaptation of the novel, the hearing takes place in another town.

Ozona is served by the Crockett County Consolidated Common School District; the district is designated as Class 2A D1 by the University Interscholastic League. District students are active in University Interscholastic League academic and athletic activities. Due to the small student numbers, they often participate in more than one concurrently offered sport in addition to other UIL academic events and school-sponsored events and clubs.

Ozona High School students have won or placed in the top three at state competitions in debate, speaking events, and journalism. The Ozona High School Band has been awarded numerous honors at both the regional and state levels. The Ozona Lady Lions have been Class 2A State Champions in 1995 and 1996 in basketball and in 1997 in golf. The Ozona Lions have been State Champions as a team in Cross Country running in Class 2A in 2004 and then Class 1A in 2013.

All content from Kiddle encyclopedia articles (including the article images and facts) can be freely used under Attribution-ShareAlike license, unless stated otherwise. Cite this article:
Ozona, Texas Facts for Kids. Kiddle Encyclopedia.