Pabbay (Scottish Gaelic: Pabaigh) is an uninhabited island in the Outer Hebrides of Scotland which lies in the Sound of Harris between Harris and North Uist. The name comes from Papey, which is Norse for "Island of the papar (Culdee)". 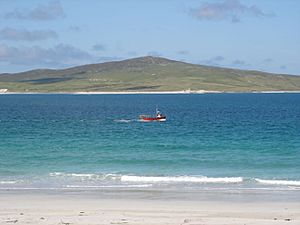 The island was once very fertile, supporting a three-figure population and exporting corn, barley and illicit whisky. Most of the stewards of St. Kilda were Pabbay men. The island was cleared for sheep in 1846. Pabbay is traditionally a home of Clan Morrison.

Pabbay lies within the South Lewis, Harris and North Uist National Scenic Area, one of 40 such areas in Scotland which are defined so as to identify areas of exceptional scenery and to ensure its protection from inappropriate development.

All content from Kiddle encyclopedia articles (including the article images and facts) can be freely used under Attribution-ShareAlike license, unless stated otherwise. Cite this article:
Pabbay, Harris Facts for Kids. Kiddle Encyclopedia.