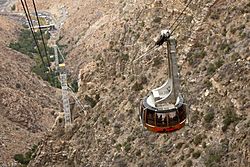 The Palm Springs Aerial Tramway – a car climbing from the valley station below.

The Palm Springs Aerial Tramway in Palm Springs, California, is the largest rotating aerial tramway in the world. It was opened in September 1963 as a way of getting from the floor of the Coachella Valley to near the top of San Jacinto Peak and was constructed in rugged Chino Canyon. Before its construction, the only way to the top of the mountain was to hike hours from Idyllwild. The rotating cars were added in 2000. 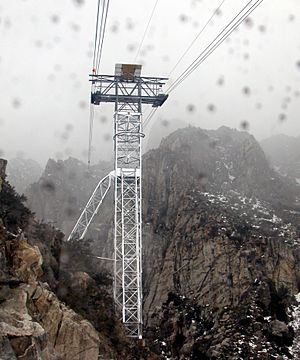 A steel truss pylon for the tramway 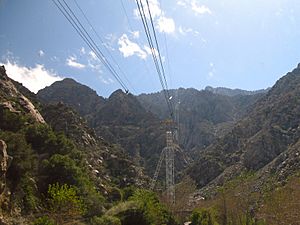 Looking up towards the Mountain Station from the Valley Station

The floor of the 18-foot-diameter (5.5 m) aerial tram cars rotates constantly, making two complete revolutions throughout the duration of the journey so that the passengers can see in all directions without moving. With a maximum capacity of 80 passengers, it is the largest of the three rotating aerial trams in the world. The other "Rotair" aerial trams are located in Cape Town, South Africa, and Titlis, Switzerland.

Passengers disembark at the Mountain Station in the alpine wilderness of Long Valley and Mount San Jacinto State Park. The air can be as much as 40 °F (22 °C) cooler at the top than in the desert. Visitors can walk along nature trails or play in the snow during the winter months. Back-country hiking can be done with a permit from the U.S. Forest Service. There are two restaurants at the summit, one of which specializes in fine dining. Both stations have gift shops specializing in Aerial Tramway-related merchandise as well as educational toys. A video presentation of the history of the attraction plays continuously in a theater at the Mountain Station. It was produced by Palm Springs television station KESQ-TV with voiceovers provided by Palm Springs radio personalities.

The view at the top can stretch northward for more than 200 mi (320 km) on a clear day, all the way to Mount Charleston north of Las Vegas, Nevada. Views to the east and west can stretch as far as 75 mi (121 km). California's Salton Sea is plainly visible to the southeast.

As it was in 1963, the only way up the mountain to deliver supplies and water is via the aerial tram cars themselves. Supplies are loaded into the passenger area before the attraction's opening while fresh water is pumped into storage tanks in the car's underbelly. 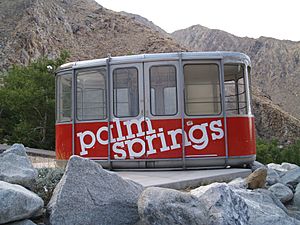 The original aerial tram cars are now on static display near the entrance to the Valley Station. 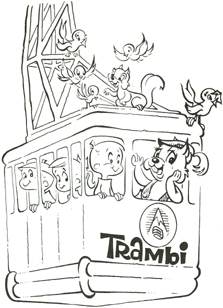 Trambi: an early mascot for the Tramway

The aerial tram was first proposed by electrical engineer Francis F. Crocker during a 1935 trip to Banning, California, with the Desert Sun newspaper publisher Carl Barkow. During the heat of the day, Crocker's gaze fell upon the snow-capped, 10,804-foot-high (3,293 m) peak of Mount San Jacinto to the east. Crocker then proposed building an aerial tram up the face of Chino Canyon, an idea that one newspaper dubbed "Crocker's Folly".

Toward the end of the decade, Crocker named the comanager of the Palm Springs Desert Inn, O. Earl Coffman, to chair the construction committee. 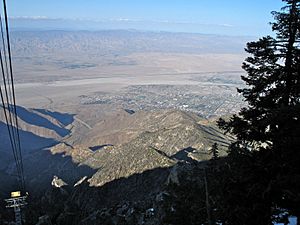 A view of the Coachella Valley from a tramway car. Palm Springs, the San Andreas Fault, and Interstate 10 are visible.

Both World War II and the Korean War shelved the project. Construction began in 1960. The unprecedented use of helicopters in the construction of four of the aerial tram's five towers helped the Palm Springs Aerial Tramway earn a reputation as a great engineering feat. It was opened in September 1963.

In 1963, a tram car became stuck for 13½ hours because of an electrical problem in the control room.

In June 1984, a tram car was headed down the mountain when a bolt from a shock absorber snapped, causing a 30-pound (14 kg) piece of metal to crash through a Plexiglas window along the car's roof. Tram passenger Elaine Tseko of Ontario, California, was struck by the piece and later died as a result of the injury.

In September 1984, during routine maintenance, an auxiliary cable snapped and wrapped around the main cable tracks. The Desert Sun newspaper reported that if the broken cable hadn't wedged itself under the main track cables, a rescue car with the tram's workmen in it could have plummeted down the mountain into the lower tramway station. "Without the snag," a state investigator said, "those two men wouldn't be with us today."

In 1985, a flash flood buried vehicles parked in the Valley Station's parking lot in mud and tore up about three-quarters of a mile of Tramway Road. Stranded passengers had to be airlifted from the area. 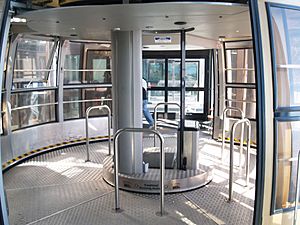 The interior of one of the tram cars currently in use. The floor revolves as the tram car ascends or descends the mountain.

Not all Tramway accidents happened on the passenger lifts. On July 31, 1991, a bus carrying approximately 60 Girl Scouts careened out of control as it was heading downhill on Tram Road, killing the driver and six passengers.

In 2000, the original tram cars were replaced by new cars that rotate slowly, offering riders a 360° panoramic view of Chino Canyon and the desert valley floor.

In October 2003, a steel cable broke and caused a mechanical failure that left more than fifty tramway customers hanging in mid-air and one hundred passengers stranded at the Mountain station for 4½ hours. During the crisis, tramway officials sought a rescue helicopter but could not locate one. The obstruction was removed by a tram operator with no training in maintenance, utilizing a borrowed Leatherman utility knife. The Desert Sun later reported that a cable inspector had discovered a break in the rescue line almost two hours before the incident occurred.

In the late 1960s, the Tramway Animal Park, now defunct, was owned and operated by Animal Behavior Laboratories of Los Angeles. It was located on 10 acres (40,000 m2) of land leased from the Mt. San Jacinto Winter Park Authority. A portion of the park included a fenced area for reindeer that were allowed to roam throughout Chino Canyon. In addition to reindeer, the park featured tame deer, cockatoos, two dolphins named Buttons and Beau, macaques, and various other species of primates (including "Suzie, the show-off chimpanzee"). The animals performed in regularly scheduled shows. 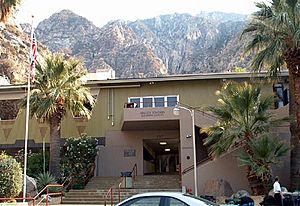 Valley Station, the lower of the tramway's two stations

All content from Kiddle encyclopedia articles (including the article images and facts) can be freely used under Attribution-ShareAlike license, unless stated otherwise. Cite this article:
Palm Springs Aerial Tramway Facts for Kids. Kiddle Encyclopedia.